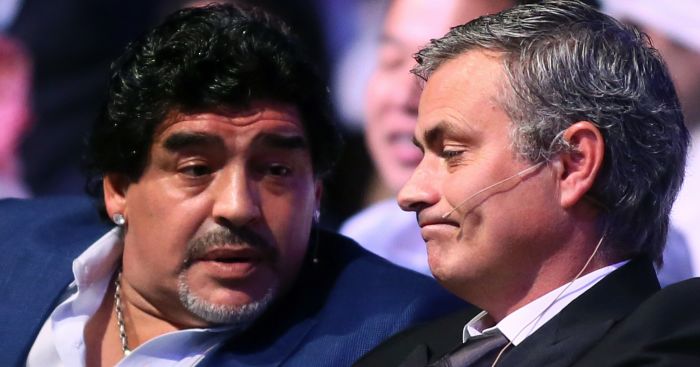 United lost to City 3-1 over the weekend that sees the Red Devils slip to 12 points adrift of their neighbours, who stay top of the Premier League table.

Maradona is currently coaching Mexican second division side Dorados de Sinaloa and he has announced his intention to watch Mourinho take training as he believes he is the best coach in the world.

“I, as a coach, still have a lot to learn,” Maradona told Marca. “That is why I will go a week to Manchester to see Mourinho train and to ask him a lot of things.”

When asked why it was Mourinho he wanted to see, Maradona responded: “Because he is the best, without a doubt.”

And Maradona seemed to discredit Guardiola‘s achievements in football by claiming that he was just implementing a style of play invented by Johan Cruyff.

“For me, yes – Mou is better,” Maradona added. “I give Pep credit for making the most of what Johan Cruyff left.

“Guardiola did not invent the tiki-taka — a style of play characterised by maintaining possession with short passing and movement. The tiki-taka was created by Cruyff. Only that now Pep can choose any player in the world he wants so the tiki-taka is easier that way.”