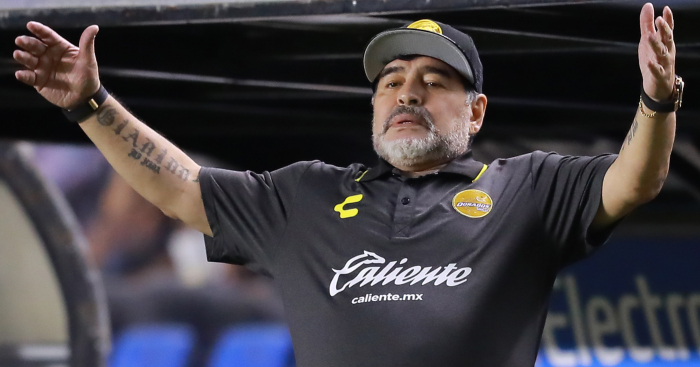 Diego Maradona says interim Argentina coach Lionel Scaloni is ‘a great boy’ but the former West Ham defender is not ready to coach the national team.

Scaloni is currently in caretaker charge after Jorge Sampaoli was fired in the wake of the World Cup. After serving as Sampaoli’s assistant, Scaloni has stepped up to fill the void while the Argentinan FA decide upon on a long-term successor.

Maradona believes 1978 World Cup winner Cesar Luis Menotti, 79, should be asked to return and the Argentina icon does not believe Scaloni is ready to make the step up to permanent boss.

“Scaloni is a great boy but he can’t even manage traffic,” Maradona told Clarin. “How can we give the national team to Scaloni?! With everyone who has passed through that team, who got their teeth and heads broken, you’re going to put Scaloni in?

“Now Scaloni says ‘I am prepared’. I’ve never even seen you score for Argentina.

“No offence. As a person, let’s go and share a barbecue. But as a coach and in the national team, no.”

Maradona reckons Lionel Messi should tell the national team to ‘f*ck off’ as the Barcelona star considers his international future. Scaloni’s decision to leave the No.10 short vacant while Messi decides has particularly irritated Maradona.

“I think he’s a jerk,” he said referring to Scaloni. “Because if I went and gave the 10 to Messi, Messi should give it to the next 10. It’s ridiculous, it gets me angry.”