Home All The News Maradona on health scare coverage: ‘I am very much alive’ 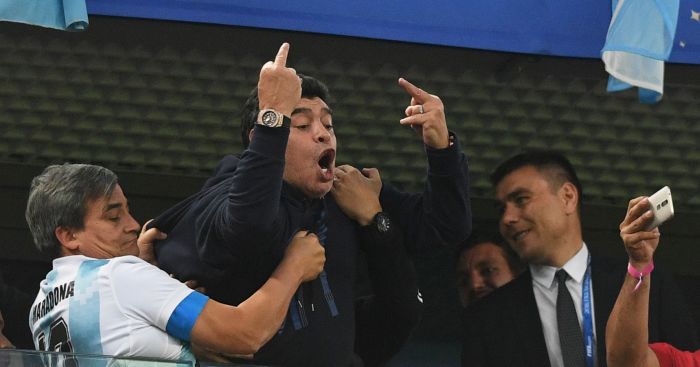 Diego Maradona was shocked by how his World Cup health scare on Tuesday was reported and insists: “I am very much alive.”

The 57-year-old, who captained Argentina to World Cup glory in 1986, said he had been suffering from neck pain as he attended his country’s game against Nigeria earlier this week.

But he denied reports he had been hospitalised and demonstrated his good health with an appearance on Telesur’s ‘De La Mano del 10’ programme.

He said: “I was shocked that (reports suggested) there had been a stretcher, an ambulance. Nothing happened.

“We were all together, the Telesur team and my team, and we could not believe how social networks started to make a big lie, which made no sense, go viral like that.

“It makes me a bit angry, because my sister, yesterday she made me whistle on the phone to see if I was okay, and I went (whistles).

“My brother in Italy, my nephew in the United States worried, because of course the bad news travels much faster than the good news.

“I am very much alive, and very well taken care of.”

Argentina beat Nigeria 2-1 to progress to the last 16 of the World Cup, where they will face France on Saturday.

Maradona was criticised for his conduct at the match, as he made obscene gestures following Marcos Rojo’s late winner.