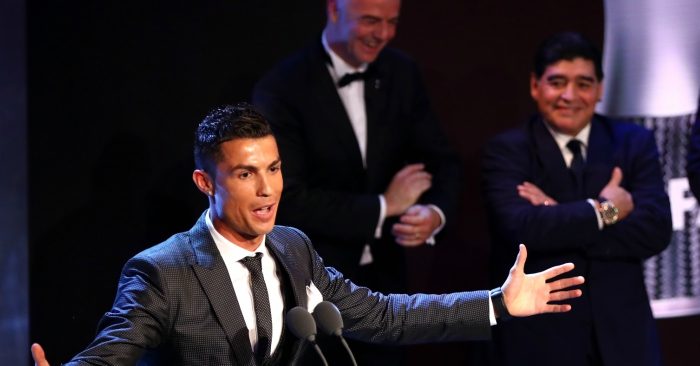 Diego Maradona has dismissed Cristiano Ronaldo’s claim that he is the best footballer ever.

Ronaldo declared himself “the best player in history” earlier this month after winning his fifth Ballon d’Or.

The Portuguese’s comments attracted a reaction from all corners of the football globe, and now Maradona has responded.

In an interview with AS, the Argentina legend stated that he would “have a bet” on Gremio to beat Ronaldo’s Real Madrid in the Club World Cup final on Saturday. Even without star player Arthur, Maradona “would still have a little wager on them. Despite that son of a b*tch Ronaldo…”

When asked for his thoughts on Ronaldo’s “best player” comments, Maradona replied: “Tell him to stop taking the p*ss.”

And when asked what Ronaldo being the best player ever would make him, he said: “That’s why I said stop taking the p*ss.”

Asked who the best player in history actually was, Maradona added: “For me… from the little that I saw, Alfredo Di Stéfano, Cruyff… And Messi. Cristiano could be up there too.”

He then described Ronaldo as “marvellous”, saying that he liked his “definition”.

“Another of the things that I recognise in Cristiano Ronaldo is that when the team needs him, he’s there,” he continued. “He has that.

“And eh, listen, after ‘El Flaco’ Cruyff, there weren’t many players who have had that quality.”