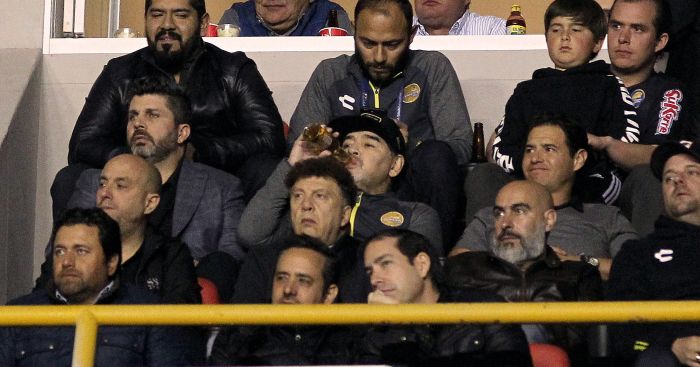 Diego Maradona appeared to throw a punch at journalists following his side’s loss in the Mexican second division play-off final.

The Argentina legend is currently in charge of Mexican club Dorados after taking over the outfit when they were 13th in their 15-team league.

Many questioned the club over the appointment but Maradona proved his critics wrong by leading Dorados to the brink of promotion.

However, Atletico San Luis beat them 4-2 in the second leg of the play-off final on Sunday to win promotion to Mexico’s top-flight with a 4-3 aggregate victory.

Maradona was watching the match from the stands after he was sent off late on in the first leg for abusing officials.

During the match, the 58-year-old – who has publicly battled drug addiction and alcoholism – was seen drinking a beer while watching his team before the incident after the final whistle.

A video shows him walking through a crowd of reporters before swinging his arm towards the media and then being led off by security.