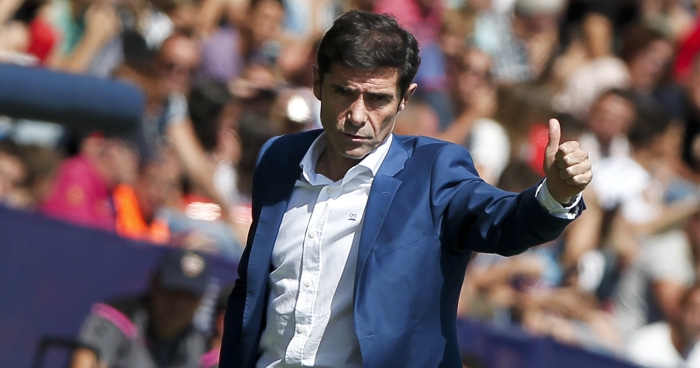 After years of frustration, financial problems, fan protests and flattery to deceive, the good times finally appear to be coming back to Valencia.

Los Che are one of three undefeated teams so far this season, along with Barcelona and Atlético Madrid. They have won each of their last four games, scoring 17 goals in the process. They are second in the table, ahead of both Madrid clubs. At the same stage last season, they had already lost five times and sat just two points above the relegation zone.

So what has brought about such a remarkable shift in fortunes? Well, there have been a number of changes at the club from the boardroom to the dressing-room, some subtle and some sweeping, that have helped create an air of stability and positivity around the club.

The continued presence of unpopular owner Peter Lim, who was originally hailed as a hero when he first rode into Valencia in 2014, clearing the club’s substantial debt, has been mitigated by the departure of the even more unpopular president Lay Hoon Chan.

Both Lim and Chan, along with sporting director Jesús García Pitarch, were the targets of angry protests from the Valencia fans after repeated failures on the pitch, several poor managerial appointments and a lack of investment in the team.

Chan was replaced by Anil Murthy in a change that represents a clean break from the failures of Lim’s reign, but arguably more important to the remodelling of Valencia’s structure and their subsequent renaissance has been the appointment of general director Mateu Alemany.

Alemany is considered a steady hand from his time as president of Real Mallorca, and is essentially in charge of the day-to-day running of the club. This enables Lim to blend into the background, and as far as Valencia fans are concerned the less they see of Lim, the better.

Alemany was instrumental in bringing new manager Marcelino to the Mestalla, and his insistence that the coach will have the final say on transfers and team matters suggests that a whole new management culture is now being fostered at the club.

When previous managers Gary Neville, Pako Ayestarán and Cesare Prandelli were appointed, it felt almost random. It was as though the board had no idea which direction to go, so took a chance and hoped for the best. But there is a sense of permanence around Marcelino, as though the board have actually thought about it, seeing how well he did at Villarreal and identifying him as the right man to lead Valencia forward.

Unlike his aforementioned predecessors, he has been afforded the luxury of making a team in his own image. The club have not spent huge amounts of money in the summer, but have invested shrewdly.

Marcelino is renowned for his obsession with fitness, and sets up his teams to counter-attack at pace. He was able to make the necessary changes to the squad to suit his system this summer, shipping out the likes of Enzo Pérez, Álvaro Negredo and Nani, and bringing in younger, more mobile players like Geoffrey Kondogbia, Gonçalo Guedes and Gabriel Paulista.

They were also able to keep hold of talented youngsters Carlos Soler and José Luis Gayà, who had both been linked with Barcelona, while the change in manager and system has breathed new life into captain Dani Parejo and forward Rodrigo, whose early season form has seen him break into the Spain side.

On top of all this, Marcelino has been able to achieve the impossible and transform Simone Zaza from penalty-fluffing laughing stock to dead-eyed goalscorer. Zaza is behind only Lionel Messi in the La Liga scoring charts, and is showing how good a player he can be in the right system and with added confidence.

The long-suffering Valencia fans are now getting what they wanted all along – a competitive and entertaining team, a manager they can get behind, and less interference from the boardroom.

Right now, for the first time in years, there is harmony between all parts of the club: the fans, players, manager and board. The board allowing the manager to control all football matters produces better results for the team, while the longer things stay sweet on the pitch, the less the owner will feel the need to get involved.

For now, this balance has been struck, and there is a buzz around the club that has not been seen since the glory days of the Rafa Benítez era.

Of course it’s too early to predict how long they can keep this good thing going, but for the first time in recent memory, it feels like this once-great club has a bright future.