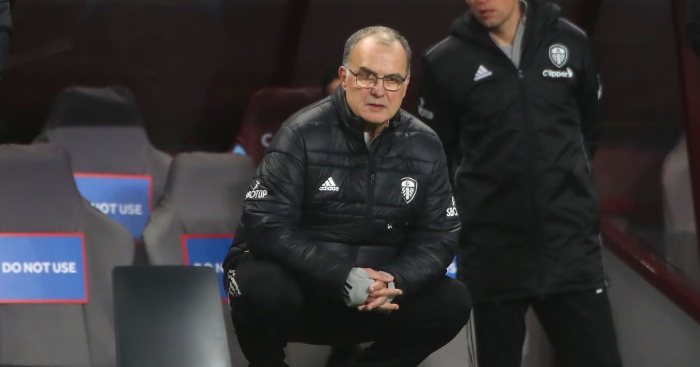 Leeds United manager Marcelo Bielsa has praised Patrick Bamford’s ‘wonderful goals’ after he scored a hat-trick in their victory over Aston Villa.

Aston Villa were close to opening the scoring in the first half as a Jack Grealish chance was cleared off the line.

In the second half, Bamford put Leeds ahead with a close-range finish after keeper Emiliano Martinez had saved the previous shot.

The striker scored against in the 67th-minute. This time it was a devastating hit from outside the box that gave the Villa shot-stopper no chance.

Helder Costa set Bamford up again in the 74th-minute, a chance which he dispatched of confidently with a curling finish.

Speaking to BBC Sport after the match, Bielsa said: “It was an important game for us and a deserved triumph. We scored first and were a little bit lucky they didn’t score some of the chances they had.

“We were playing well even before the goal and had played well enough to go ahead.

“Very happy for Patrick [Bamford] because he scored some wonderful goals. Apart from that a noble player who sacrifices a lot for the team – generous also.

“I think his development is more to do with him and less to do with me.”

Bielsa had to make an early substitution in the first half as Pascal Struijk looked like he was getting close to a red card. Bielsa said: “He got an early yellow card and there was a lot of mobility in the middle of the park so I wanted to take him off as a result.”

The victory puts Leeds in third place after six matches, although they could be overtaken this weekend depending on other results.

Their attacking play was effective and brilliant to watch, with Costa and Jack Harrison supplying Bamford regularly.

Leeds’ next match is against Leicester City on Monday 2nd November.