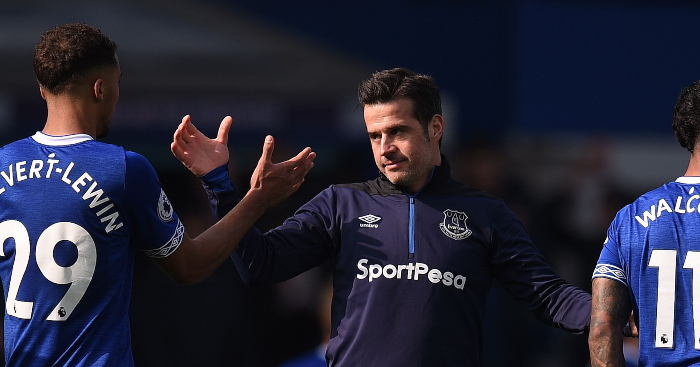 Marco Silva was full of praise for his team after Everton beat Arsenal 1-0 at Goodison Park, and wasn’t keen to dwell on a touchline argument with Unai Emery.

The Toffees moved up to seventh in the Premier League table with the three points after Phil Jagielka’s early strike proved the difference between the two sides.

Jagielka, who was only brought in at the last minute after an injury to Michael Keane in the warm-up, gave the hosts the lead in the 10th minute. Lucas Digne sent in a long throw and the Arsenal defence failed to deal with it as the ball fell to the veteran centre-half, who had an easy finish six yards out.

“Jagielka was to start on the bench, but showed how he is a good professional and prepares himself for what the coach and team needs. He is always ready to help the team.” said Silva, speaking to the BBC after the game. “He really deserved the goal.”

Emery responded to a flat performance in the first half by throwing on Aaron Ramsey and Pierre-Emerick Aubameyang for Sead Kolasinac and Mohamed Elneny at the break, but neither could change the game as Everton defended their lead comfortably.

“Really, really happy,” continued Silva. “We deserve the three points. The chances we created, we should score more goals. It is a fantastic win – one more clean sheet.

“That’s the spirit I like, the desire to win every challenge. (Earlier in the season) we lost some confidence, we had a break and after we worked really well. It’s the same team with more confidence.

“It is fantastic to be solid in this way.”

There was a flashpoint on the sidelines ten minutes before full-time when Silva exchanged some choice words with Gunners boss Emery after Shkodran Mustafi took down Dominic Calvert-Lewin. But Silva played it down afterwards.

“The football is emotional,” he explained. “He wants the best for his team, I want the best for mine. At the end we spoke together and everything is normal.”