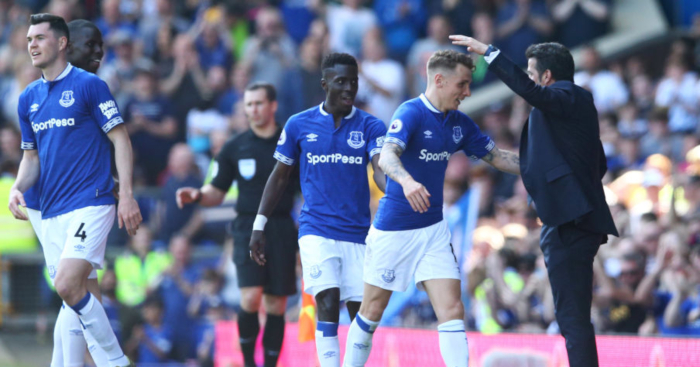 Everton’s darkest moment came at Watford, on that drab Saturday when Vicarage Road crowed over a 1-0 win. Or perhaps it was two weeks earlier at Millwall, during that humbling FA Cup defeat which seemed to sap the last bit of life from the season and left Marco Silva waiting for a knock at his door.

Maybe it was even earlier than that. Maybe Everton’s season really bottomed-out two days before Christmas, when Tottenham came to Goodison Park and administered a savage beating.

On all of those days, the chance of Silva lasting the entire season had seemed unlikely. In fact, there have been times during 2018-19 when it appeared as if all that stood between him and the sack was the memory of a lengthy and complicated courtship; the optics of dismissing him before a settlement had even been reached with Watford were always likely to be prohibitive.

Thank goodness. Nearly three months on from their Vicarage Road trip, Everton look an entirely different side and Silva – suddenly and without any prior warning – appears finally to be leading them in a positive direction.

This recent stretch of the season hasn’t been without caveats. The 2-0 loss to Fulham was as dismal as it sounds, and defeat at St James’ Park to Newcastle saw the hopeless surrender of a two-goal lead. But those are just two losses in eight and the substance of that sequence has been overwhelmingly positive. Chelsea were initially resisted and then overcome. Liverpool crawled home across Stanley Park bruised, if not quite beaten. Arsenal left Goodison having taken an almighty pasting, represented in everything other than the score. And most recently Manchester United, who were given an outright thumping on Sunday.

Interestingly, it wasn’t a surprise. It was in the traditional sense and anyone backing a 4-0 home win would have walked off with a small fortune but, as a measure of the teams’ momentum and their respective trajectories, it was less shocking. It’s becoming clear that United are built on sand and are actually sustained entirely by Ole Gunnar Solskjaer’s platitudes. Conversely, Everton are being revealed as an obdurate side dashed with flair, one which now poses a reliable threat in that sort of game.

Perhaps most impressive has been the different approaches utilised within those signature wins. In the rope-a-dope victory over Chelsea, and the physical relentlessness of the wins against Arsenal and United, Everton were a major inconvenience for their respective opponents. On each occasion that was for different reasons, though, suggesting much more than just cup-final effort and hinting at a tactical range that this team wasn’t presumed to possess.

Chelsea’s great ailment this season has been their inability to make proper use of the ball and their failure to penetrate the heart of a defence. So Everton blocked up the middle of the pitch and waited for the inevitable mistakes; they won with a set-piece goal and a penalty rebound.

Arsenal’s problems have been their shortages in defence, their confused midfield and the suspicion that conditions within games have to be exactly right if they’re to win. So Silva and Everton made it as uncomfortable as possible for them, ceding possession but swarming all over the ball-carriers, ending the game having only won by a single goal but having out-shot their visitors 23 to 7.

United? Well, United have weakness all over the pitch, but their principal issue is industry; they have no heart. Solskjaer is relying on a core of players who aren’t fully engaged – who won’t chase counter-attacks, who emotionally disengage much to easily and who, in a few cases, are just waiting for the season to end and for their agent to call.

Those are United’s problems, but Silva was smart in identifying them and then using them to his advantage. Just as he had done in those prior matches. Everton were more efficient than they had been against Arsenal, they were far better in front of goal, but the soul of their performance lay in their attitude: the way they contested and (invariably) won the ball, how quickly and eagerly their players shifted from zone to zone and how, even when the game was won, their desire to physically punish United never wavered. They enjoyed making their opponent suffer.

It’s telling that Silva exerts that kind of control over this players. That despite the long, barren spell at the turn of the year, when he was presumed to be heading for the exit at any moment, faith in his approach has remained. Seamus Coleman mentioned that post-game at the weekend, referring to the ‘sticky spells’ but describing them as a necessary cost of progress. It’s the kind of cliche you expect from a senior player, but it’s authenticated by the way this side is playing. Europa League football is a carrot of sorts, but these players are evidently being engaged by a desire to keep Silva at the helm.

It shouldn’t be forgotten either that Everton are a side battling a serious structural deficiency: they have no recognised forward. Dominic Calvert-Lewin has done a passable job, but he’s no number 9. Instead, these performances of verve and power have been instructed from deep; by a midfield which, with the outstanding Idrissa Gueye alongside a fit and free Morgan Schneiderlin, looks very rigid indeed; and by a full-back tandem which includes Lucas Digne, who suddenly looks like one of the signings of the season in a defence which has kept six clean sheets in eight games.

If Everton were a boxer, we’d be talking about their footwork rather than their raw punching power, and that’s a sign of improving health.

The best measure is probably Goodison’s mood, though. The ground is on borrowed time now, the clock has begun to tick, but it remains one of the country’s great cathedrals of sport. Yet in recent times, it’s been less of an asset to the team. The irritation which leaked into the building and under Roberto Martinez’s watch has never vented away, and the many failings of Steve Walsh, Ronald Koeman, and Sam Allardyce only allowed it to fester. Until the beginning of 2019, Silva himself hadn’t exactly flung open the windows, either.

But now the atmosphere is changing. Silva remains one of European football’s transient personalities, never really settling long enough for anyone to draw any permanent conclusions, but he has this team looking methodical, hard-working and smart in a way they haven’t for a long time. Three months ago, supporters presumably couldn’t wait for this season to end. Now, they’d like another 20 games to see how their side might mature.

Mature they should. The more settled a team becomes, the easier it is to imagine how they might develop and what they need to improve. In retrospect, Marcel Brands had a very competent first summer as technical director, with almost all of his signings belatedly showing their worth. Given how many issues he had to address, that’s really quite impressive and so logically, with a more defined starting XI and a developing bond with a settled head coach, he should now be working from a much stronger position.

The combination of that ideological clarity and the brighter, bolder football on the pitch has really brought Goodison back to life. Suddenly, Everton are mobile again. They have inconsistencies to eliminate and flaws to cure, but they’re back in the box seat to finish as best of the rest. Back in a position they’ve previously owned and, for the first time in a while, fixed to keep moving forward.

That is the long-term legacy of those three seemingly unrelated games and this strong finish to the season: Everton are something again. The fog has started to lift, revealing the beginnings of a new playing identity. A head coach with the tactical dexterity to shift and move with the division’s best. A technical director with a steady hand. And an owner with a lot of money.

Nobody expected to write this at the turn of the year, but Everton is suddenly a good place to be again.