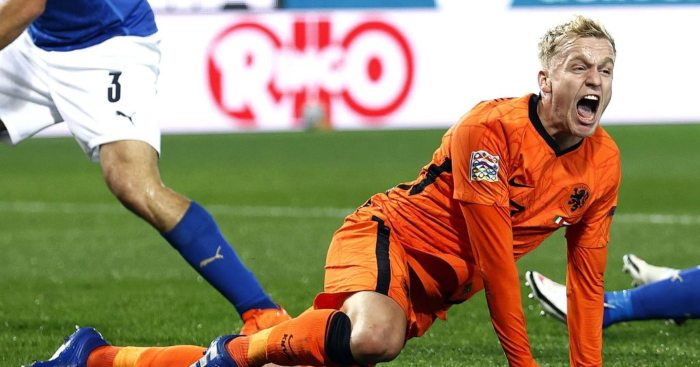 Dutch legend Marco van Basten has hit out at Donny van de Beek for choosing to move to Man Utd in a “bad” career move.

The 23-year-old is yet to make a Premier League start for the Red Devils, despite scoring on his debut against Crystal Palace, failing to even be brought off the bench in a drab draw with Chelsea on Saturday.

Van de Beek has played a combined 61 minutes for Man Utd in four substitute Premier League appearances, while his two starts so far have come in the League Cup.

And Van Basten thinks his compatriot should’ve chosen a move to a club where he would’ve got more game time.

“It is very bad for such a boy to only play six or seven times in a year,” Van Basten told Ziggo Sport.

“That’s terrible for your rhythm! You can earn a lot more, but you also have to see where you can play.

“Is it about a five-year contract that he can sign? No, that’s bullsh*t. Then you shouldn’t go to Manchester United, but wait with it or for another club. You have to want to play football every week, and such a club is then bad for your career.”

Van de Beek’s agent, Sjaak Swart, was concerned last month at his client’s lack of time on the pitch, he told VoetbalPrimeur: “A substitute, I don’t like it at all. I couldn’t do it myself, substituting in with four minutes left to play. Then you’d better let me sit down.”

Gary Neville also weighed into the debate surrounding Van de Beek over the weekend, with the former Man Utd defender calling his absence a “mystery“.

“What is a little bit of a mystery is the use of Van de Beek since he’s been signed for £40 million,” Neville told Sky Sports.

“He must be thinking: ‘What am I doing here?’ at this moment in time.”