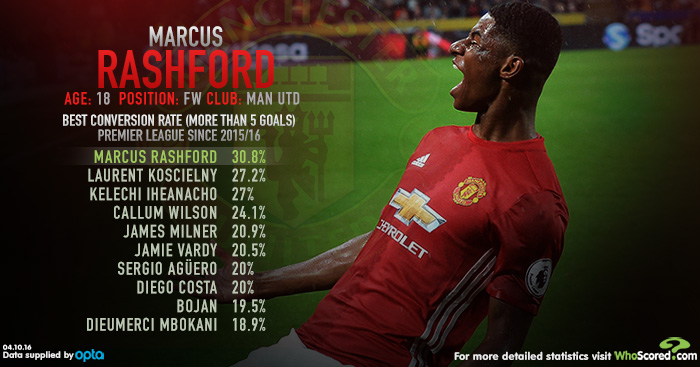 Having last week asked the stat lovers at WhoScored.com to look into the Premier League’s most profligate – with Dimitri Payet inevitably going on to score a wonder goal just days after revealing he had mustered the most shots without scoring in the top flight – this week the attention turns to those that have been prolific by comparison.

Assessing only those to have fired off at least 10 shots at goal this season, the following is a rundown of players with the best conversion rates in England’s top tier as we enter the second international break.

Heung-Min Son – 22.2% conversion
Netting with four of 18 shots in the league this season, a modest 38.9% of which have been on target, a Spurs career that seemed in danger of falling flat before really having had the chance to take off has done just that for the South Korean. Profiting from absences in attack since the start of last month, Son is finally getting the opportunity to prove his worth and boy is he doing so, earning the highest rating from WhoScored.com in Europe’s top leagues so far (8.83).

Romelu Lukaku – 23.8% conversion
While the Belgian has been criticised for being hit and miss in front of goal, his start to life under the tutelage of Ronald Koeman has been very promising indeed. The picture of Lukaku racing off in celebration to share a warm embrace with a manager who admittedly does look like he would give a good hug is becoming a familiar one. The Everton striker has scored five goals from 21 shots, an impressive 13 of which have been on target – joint second in the Premier League.

Nacer Chadli – 25% conversion
It’s been a strong start to life at the Hawthorns – a destination that has, under Tony Pulis at least, proven difficult to showcase attacking talent – for Nacer Chadli. West Brom’s record signing from Tottenham has already scored three goals in four appearances for the club, just one shy of the Baggies’ joint second top scorers from the entirety of last season, having fired off 12 shots thus far.

Troy Deeney – 25% conversion
Moving to within one goal of an exclusive 100-club for the Hornets, many believe that the Watford captain can feel more than a little aggrieved to continue to be overlooked at international level considering the form of certain players in Gareth Southgate’s first squad. Taking his tally to three goals for the season at the weekend, coming from 12 shots, only three Englishmen (Kane – 26, Vardy – 19 and Defoe – 17) have scored more Premier League goals than Deeney (16) over the past 12 months.

Raheem Sterling – 25% conversion
Given his finishing at times prior to this season, not least in an ultimately disappointing debut campaign at the Etihad, that Sterling features here is somewhat surprising and indicative of his restored confidence under Pep Guardiola. The young winger has four league goals to his name already from 16 shots, meaning his conversion rate has more than doubled from last season (11.5%) to this. 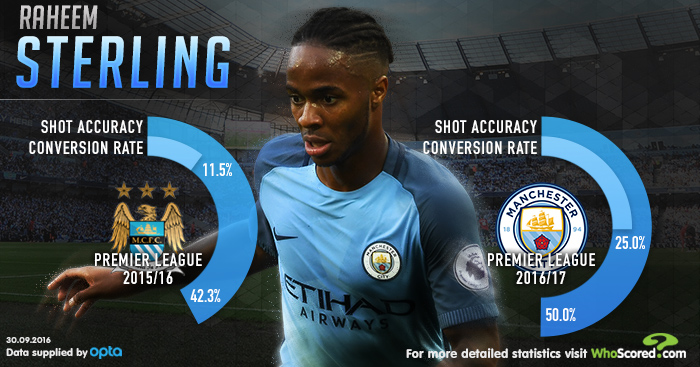 Diego Costa – 27.2% conversion
It’s been a sensational start to the season for Diego Costa, who is back in the sort of form that he was when first arriving in England, if not better. With six goals and two assists to his name already, the 27-year old looks markedly fitter than at this stage last season and seems to be enjoying life at the Bridge again under Antonio Conte. His goal tally has come from 22 shots, of which 13 have been on target to tie with Lukaku in second in that regard.

Marcus Rashford – 30% conversion
One man that weary England fans will be excited to watch in the coming days is Marcus Rashford, who has worked his way into the United team, albeit belatedly under Jose Mourinho. The teenager has three goals to his name this season from just ten shots, and his unerring finishing has been apparent since breaking into the first team at Old Trafford. Indeed, since the start of last season Rashford boasts the best conversion rate of players to score more than five Premier League goals (30.8%).

Leroy Fer – 30.8% conversion
Topping the pile in terms of proficiency in front of goal thus far, Leroy Fer has hit the ground running since securing a permanent transfer to Swansea after a relatively modest loan spell last season. The Dutchman failed to score in 11 league appearances for the Welsh outfit in 2015/16 but has four in seven already this time around, and from just 13 efforts at goal. A shot accuracy of just 38.5% means that just one of his attempts on target has been saved thus far, with that honour belonging to Claudio Bravo, who could do with some positive press. There’s a shred for you, Claudio.