Home Mediawatch Marcus Rashford and the left: A media obsession 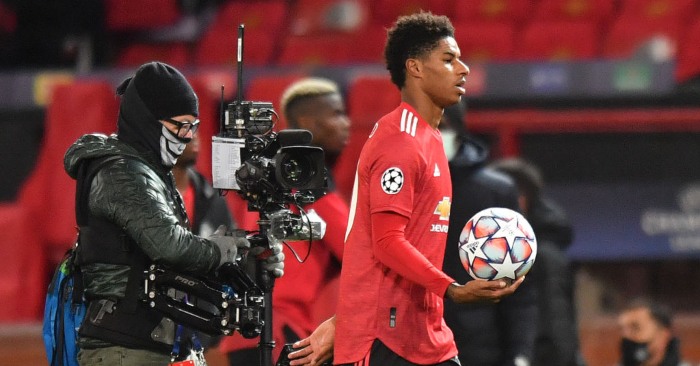 There has long been an obsession in the media about Marcus Rashford being a No. 9. Even when he excels on the left for Manchester United, it’s like nobody can really rest until he is playing as an out-and-out striker. Cue Dave Kidd in The Sun:

‘THE honours and accolades are being piled on to Marcus Rashford — and justifiably so.

‘An MBE, a national treasure, a potential BBC Sports Personality of the Year, the greatest living Englishman.

‘Rashford’s extraordinary dedication to his campaigning against child poverty has fully earned him all this.

‘Yet there is one status Rashford has craved above all in his 4.5 years as a first-team player — that of Manchester United’s first-choice starting centre-forward.

‘And in Wednesday’s 5-0 Champions League rout of Germans RB Leipzig, he looked closer than ever to fulfilling that aim.’

He literally said as recently as April that he prefers to play from the left, but carry on.

‘After the Bundesliga leaders were filleted by Rashford’s 16-minute hat-trick, there was some sarcastic chuckling between Paul Scholes, Rio Ferdinand and Gary Lineker in the BT Sport studio that the star was ‘a winger, not a centre-forward’.

‘The comments stemmed from Jose Mourinho’s time as Manchester United boss — when Rashford played predominantly out wide, with Romelu Lukaku as the No 9, and he frequently struggled for form.’

So are we ignoring the whole of last season, when he played 35 times from the left and just nine times as a centre-forward? Oh and his goal totals were 18 and four from each position so there is almost no difference in terms of goal output.

‘He is beginning to look like the best centre-forward at the club. A better option than Martial, Greenwood or Edinson Cavani, who can all operate centrally or out wide.’

Granted, Martial has had a poor start to the season as a centre-forward but Greenwood has played 75 minutes as a striker this season and scored twice. And Cavani has played 41 minutes for his new club; declaring him to be an inferior striker to Rashford on that evidence seems more than a little harsh.

‘It all helps Rashford’s cause as a central figure at United – no longer on the periphery in terms of his playing position or personality.’

He has literally started two Premier League games as a central striker this season and scored one goal.

‘Rashford had the most prolific season of his career last term with 22 goals for United, nine more than his previous best.’

Yes, and the majority of those goals came from the left wing. This is just plain weird now.

‘This season the emphatic response has arrived, with seven goals in nine games — including a belter in the victory at Brighton, a winner at Paris Saint-Germain and then that treble against last season’s Champions League semi-finalists.

‘Rashford wreaks havoc coming from the left wing, as the Tory Government know. Yet his future belongs at the centre of United’s attack. And that future is almost here.’

Maybe. Maybe not. It sounds like he really does not care where he plays so we’re not sure why anybody else should. Oh and wanting to feed hungry kids really should not be the preserve of the ‘left wing’. We’re pretty sure Rashford has never mentioned his politics. He has mentioned his favourite position, mind.

He ‘hinted’ by never once mentioning Manchester United, which is quite the trick.

No news is old news

We often express our shock and (almost) awe at the work of the Mirror website‘s prolific Jake Polden but this – the most-read story in Mirror Football over recent days – might be his finest/lowest hour yet.

The apology from Van Nistelrooy? 2011.

The massive number of clicks for Polden without any new information whatsoever? 2020.

A question of length

‘Manchester United’s midfield headache is now a £197m migraine as Bruno Fernandes, Paul Pogba and Donny van de Beek all fight for starting spots… So, can Ole Gunnar Solskjaer EVER play them together?’

With a headline that long, it can only be MailOnline.

And with a sentiment that negative, it can only be a website that is obsessed with money and prices.

The answer? No, he probably can’t EVER play them together. But we’re pretty sure that Sir Alex Ferguson never played Dwight Yorke, Andy Cole, Teddy Sheringham and Solskjaer together either. How did that work out?

Joke of the day!

‘If anyone should be able to recognise a world-class Centaur-forward, it’s the Greeks!’ – The Sun.

Mediawatch particularly enjoyed the exclamation mark! So we are all left in no doubt that it is a joke!

That was Graeme Bryce, clearly learning at the pale feet of The Sun’s comedy cockney Paul Jiggins, who loves a bloody theme about as much as he loves Millwall.

‘JOSE MOURINHO and his so-called Spurs gems left the diamond capital of the world with doubts over their true value after being made to look like 24-carat plonkers.’

Can you use the phrase ‘so-called’ if literally nobody has ever called them that before?

We’re going ‘no’. And we are so-called experts.

Don’t know much about algebra…

Mediawatch definitely prefers the chirpy cheesiness of Jiggins to the utter miserabilism of Mark Irwin, who watched Arsenal beat Dundalk 3-0 and decided that his ‘match report’ should really begin with some musing about the UEFA co-efficient system. Because why praise Joe Willock or Reiss Nelson when you can be cynical about some mathematics?

‘DEEP in the bowels of Uefa’s Swiss headquarters, someone on their club coefficient committee is quietly chuckling away to themself.

‘How else to explain Arsenal’s ranking as the 11th best team in Europe?’

The UEFA co-efficient system is entirely based on numbers and most specifically on every club’s performance over the last five years. And over the last five years, Arsenal have played in the knock-out stages of the Champions League twice and then reached the Europa League semi-final and final. Last year was poor but that explains why Arsenal have dropped to 11th from ninth.

That’s how you explain Arsenal’s ranking as the 11th best team in Europe. If you are a grown-up.