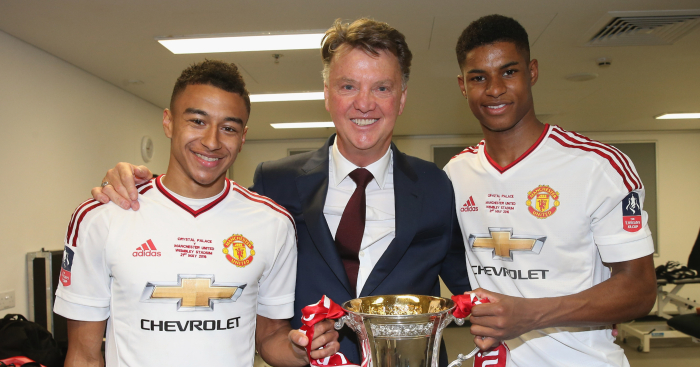 Marcus Rashford claims Manchester United lost a bit of the buzz around young players when Louis van Gaal left in 2016.

Van Gaal handed Rashford his debut four years ago and the 22-year-old repaid his then-manager’s faith with eight goals in 18 appearances under the Dutchman.

But the coach was dismissed at the end of the season, with Jose Mourinho taking his place.

Van Gaal developed a reputation for promoting young players throughout his managerial career and Rashford praised his former boss’s man-management skills during his formative days as a part of the first-team squad.

Speaking to Ryan Giggs in an interview for Bleacher Report, Rashford said: “Van Gaal was very technical in everything and then you [Giggs, who was Van Gaal’s assistant at United] were the one that used to always say to us, ‘if you get a one-v-one, just don’t think too much and just go at it. If you can drive him back and make something happen, then do that’. That was what I was used to hearing, and then Van Gaal was more technical.

“His man-management, with me anyway, was good. He used to speak to you all the time, even off the pitch he used to ask me how college was going and stuff like that.

“When you’re young, those things matter to you and he helped me settle in a lot. You two worked well together and it doesn’t surprise me that there were so many young players coming through during that period.

“We all enjoyed training, whenever we’d go up and then return to our own age group, it was the talk of the dressing room until the next time that you’d go up.

“Everyone really enjoyed training with you two, and I’d probably say after that season, we probably lost that a little bit in terms of when the younger ones (players) were coming up.”