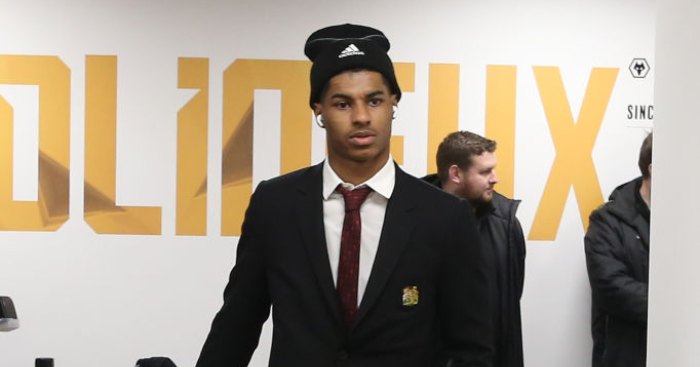 Has the Rashford bubble burst?
Former Sun journalist Neil Ashton is a PR adviser to Manchester United and he must be incredibly happy indeed to see Marcus Rashford garner so much excellent publicity by being a fantastic human being. United as a whole have handled this pandemic faultlessly and Ashton is probably due some credit.

So let’s hope that Rashford has a short memory and does not recall some of Ashton’s work for The Sun in recent years.

In March 2017, when Ashton broke the ‘exclusive’ story that ‘JOSE MOURINHO wants to kick off a massive summer spending spree by signing Eric Dier’ (he didn’t), one utterly irrelevant aside was that Rashford ‘is building an enormous new home in Cheshire for him and his family, has recently helped buy his sister Chantelle a new house’.

Just a few days later, he was back again, writing under the headline of ‘I’LL BLING ALL THIS TO AN END’. There’s an excellent Mediawatch still available from that day but the highlights included the accusation that Rashford ‘has lost his way since the big bucks started to roll in’. Then there’s this:

‘The £30,000-plus Rashford spends annually on car insurance for the fleet of motors that started arriving when he signed a new deal barely touches the sides. Last month he splashed out £14,500 on a Rolex Santos wristwatch for his mother Melanie’s birthday.

‘He has an obsession with Balenciaga – a luxury French fashion brand – and has more than 30 pairs of their £400-a-pop shoes to choose from each morning.’

Pretty much exactly a year later, Ashton was back with a column saying that Rashford needed a ‘reality check’. Again, Mediawatch did a wonderful job of picking that apart but it’s worth noting now, with what we now know of the Manchester United striker, that Ashton decided he was ‘living in a bubble, a cosseted world that will seem pretty cool to a kid who grew up in Wythenshawe, on the outskirts of Manchester’.

‘The Nike photoshoots, the private jets, the personal indulgences, such as the fast cars and showy houses, are rewards for high-performance.

‘Instead, Rashford is in danger of losing touch with reality.’

It looked ridiculous then and it looks cruel, inhumane and nasty with the advantage of hindsight. PR that, Neil.

Chattel challenge
But Ashton has moved on from The Sun, and they have obviously moved on from judging footballers on their belongings. We joke of course…

‘Aubameyang vs Aguero: The goals, customised cars, luxury homes, jewellery, and Wags of the Arsenal and Man City strikers’

It’s the question we all want answered: Who owns the best wife and girlfriend?

The Art of journalism
What some outside the game do not know is that every press conference is followed by a huddle of football journalists in which they decide which ‘line’ is strongest, which should be saved for another day (God help anybody who misses this conversation and goes early; some even threaten to call the police) and which quotes can be massaged to deliver a certain message.

Without those press conferences and presumably without those huddles, perhaps communication has been curtailed. That might be the only explanation for both The Sun’s Mark Irwin and the Daily Mirror’s Matthew Dunn hearing the exact same quotes and coming to pretty much opposite conclusions.

The Sun’s back page tells us that ‘MIKEL ARTETA has warned Arsenal he will not stand for the club failing to compete in the transfer market’. They make it sound like a threat. It absolutely wasn’t. What the Spaniard said was that “if we stand still the gap to the top teams will become bigger and bigger”. Which sounds about right.

Meanwhile, Dunn heard the same quotes and decided that ‘MIKEL ARTETA has told his Arsenal stars it is their “responsibility” to get into Europe, and insists failure to do is “unacceptable”.

Was Arteta talking to the club or was he talking to the players? Or was he just talking generally to some journalists like a normal person and not ‘warning’ or ‘telling’ anyone not actually in the Zoom call anything at all? That seems the likeliest explanation.

As for telling ‘Arsenal stars it is their “responsibility”‘? The actual words he used were “we know our responsibility”, so not really a ‘telling’ at all but a sense of, well, responsibility. Oh and he never said anything was “unacceptable” but instead said he did not “accept” the gap getting bigger.

But why let that get in the way of the suggestion that Arsenal will have somehow failed if they do not bridge a five-point gap to Manchester United over the next ten games? ‘IT’S GUNNER BE EUROPE OR BUST’, after all.

Still, you got your Liverpool player in the headline.

The ‘has’ in that sentence is slightly misleading: Maguire was ‘speaking in April’.

Picture of you
Over at the Manchester Evening News, they have been busy pointing out ‘four things we spotted in Manchester United training as new partnership unleashed’, which means ‘four things we have decided after looking at the images available on Getty’. We have the same images.

The first conclusion – and it’s important to note that we arrived at this particular piece via a headline on the Express website of ‘Man Utd boss Ole Gunnar Solskjaer drops Paul Pogba and Bruno Fernandes hint in training’ – is this:

‘It’s a few times now that Paul Pogba and Bruno Fernandes have been on the same team in a United practice match.

‘The creative midfield pair, who United fans are understandably excited to see in action together, teamed up in the recent behind-closed-doors game against West Brom but tasted defeat. Before that, they were on opposite sides as United’s squad played a game between themselves.

‘This time, Pogba and Fernandes could both be seen on the team playing without bibs on the Carrington pitches. Whether this means Solskjaer is preparing them both to feature at the same time against Spurs remains to be seen.’

They also decided that Nemanja Matic was ‘down the pecking order’ because he was seen on the opposite team to Pogba in one shot. He was also seen challenging Jesse Lingard in another image, so make of that what you will. They did.

They also noticed that Eric Bailly and Axel Tuanzebe ‘appeared to be on the same side in training’ and that a picture of Harry Maguire being challenged by Daniel James was evidence of a ‘high pressing strategy’.

One thing we have noticed is that it’s time the football returned.