Home Mailbox It’s Rashford who should be worried about signings…

It's Marcus Rashford and not Mason Greenwood who should be worried, according to the mailbox. 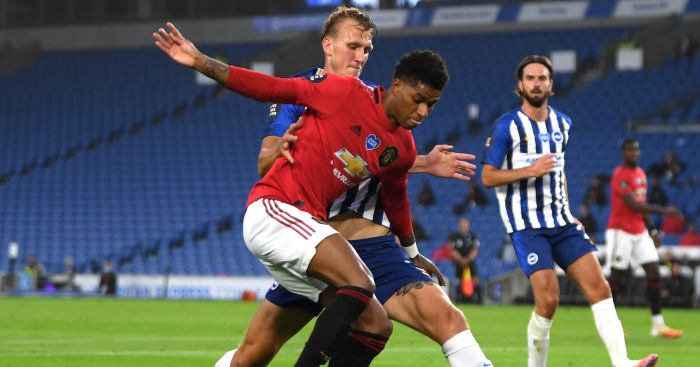 A bizarre lack of mails about the Manchester United win here. Send your thoughts to theeditor@football365.com

Boom
It won’t be long before a big club comes in for that Bruno Fernandes.
Gaz, CFC, Sidcup (did Matic actually just copy David Silva?)

Greenwood > Rashford
Greenwood looks like the real deal. He’s not just a lethal finisher, he holds the ball up well, makes space, can pick a pass and puts in a defensive shift when needed. He makes few mistakes as well, if any. He’s playing much better than Rashford right now who has loads of talent but he’s prone to making loads of mistakes as well.

I wrote in here before saying the reason “you wouldn’t bet on him in a 1 on 1 with the keeper” might be down to anxiety from a toxic work environment that Mourinho was to blame for but perhaps it wasn’t. 11 of Rashford’s goals this season were from penalties. He’s a very exciting player to watch and is certainly capable of brilliance but he frequently skies shots, makes unforced passing errors and just runs directly into opposing players. The brilliance isn’t consistent enough and while he is still 22, elite level players are producing the goods at younger ages these days and if Sancho (really not sure about that £50m leak) or another big-name forward comes in, it shouldn’t be Greenwood dropping to the bench out of that front three as far as I’m concerned.
Eamonn, Dublin

Rodgers unsackable? What about Ranieri?
Would Rodgers really have been ‘unsackable’ if Liverpool had won the league title in the 2013 – 14 season?

Recent history suggests not as just two years after Gerrard’s slip, Ranieri won the Premier League as manager of Leicester City and was sacked just 9 months later. And don’t forget, this is a manager who took a team with odds of 5,000 – 1 at the beginning of the season to winning the league for the first time in the club’s 136-year history.
Phil (exiled in Brisbane) Chiz

Leicester’s success more impressive than Liverpool’s
I recently saw the the current EPL season compared with Leicester’s astonishing title win in 15/16, due to the lack of quality in both leagues. This got me thinking about the relative quality of the ‘big six’ between 15/16 and this season to see if they are comparable. The results are interesting.

Arsenal
15/16 – Relatively stable. A settled squad. Mesut Ozil and Alexis Sanchez in the prime of their careers,. Long-term manager Arsene Wenger at the helm. Arsenal were let down by their supporters this season, who created a poisonous atmosphere around the club for no reason.

19/20 – Total chaos. On their fourth manager in two years. A rookie manager. An unbalanced squad filled with dross. Ozil past his prime and failing to make match-day squads. Shambles.

Chelsea
15/16 – Current title holders. Very strong squad with a prime Pedro added in the summer. Mourinho completely lost the plot not long into this season and Hiddink was brought in to steady the ship. Badly underperformed considering the depth of quality in the squad.

Man City
15/16 – A strong, settled squad not dissimilar to the current squad. Underperformed

19/20 – Current holders. Paid the price for a lack of investment in central defence, the loss of Laporte and Sane for the season sealed their fate.

Tottenham
15/16 – A very strong Tottenham squad with strength across the pitch and an excellent manager in Pochettino. Kane, Dembele, Dele Alli and Eriksen on top form.

19/20 – A shambles. Sorely missing Eriksen and Dembele. Kane injured for the majority of the season. Terrible full backs. Replaced Pochettino with a well past his prime Mourinho, a decision that the majority of us are still struggling to wrap our heads around.

Man Utd
15/16 – Legendary manager at the helm. A squad filled with EPL winners and big investment in the summer. Underperformed.

19/20 – Rookie manager. A squad still reeling from Mourinho’s torrid spell. Pogba and Rashford out with long-term injuries. Failed to replace Lukaku and Herrera in the summer.

Liverpool
15/16 – A transitional season for Liverpool. Rodgers was replaced with Klopp. Underperformed.

The above analysis paints a damning picture of the current quality of the EPL’s big clubs. To summarise, the big six back when Leicester won the league were far stronger than they are now. While the comparisons between Liverpool and Leicester’s title wins are understandable, Leicester’s title win was a far more impressive feat simply because their title rivals were so much stronger.
Ken, Wisconsin

Hindsight: The Liverpool way
As a Liverpool fan, I really enjoyed reading the long mail from Smith, about how rivals’ hatred fuelled Liverpool success. I couldn’t agree more.

However, I remember 2014 like it was yesterday. It hurt so bad. If you had told me then, “let Liverpool lose the title now so that they’ll get Klopp in a couple of years, who would then deliver the title in 2020”, I’d have said, “f*** that, give me the title now!”

But now that we are in 2020, I cannot help but feel exactly like Smith did, and we are in a MUCH MUCH better position for a sustained period of success with 4 trophies already under the belt. Hindsight really is 2020, pun only partially intended.
Nikhil, LFC, Chicago

This means more
I’ve seen a lot of debate recently about the meaning/relevance of “Theatre of Dreams,” “This Means More,” and so on. I know a guy from Estonia who drank Carlsberg for years even though he hated the taste, simply because they were the Liverpool kit sponsor. So here in England, everyone understands the club backstories, but if you live in Zimbabwe, or Peru, or Arizona, and you see a (theoretical) coach with “This Means More” on the side, that might be enough to choose LFC over another (theoretical) coach with bubbles coming out the windows. Who doesn’t dream of a once-in-a-lifetime trip to the Theatre of Dreams?

Everyone here knows they’re all marketing slogans, and rolls their eyes. But the thing is, they wouldn’t have them if they didn’t work. The Eagle of Benfica, the Bubbles of West Ham, or the red bus of Liverpool, they’re not trying to convince fans of other clubs to change their minds. They’re all designed to get their fans in the mood for football, and to seduce the undecided. So until there’s a Board of Marketability that awards points in addition to those earned for games played, love the hell out of yours, but don’t take it too seriously.
Brian

Thumbs-down to drinks breaks
I’ve read a few mails since “restart” suggesting that the drinks break could/should be a permanent fixture post Covid. 3 points on this:

1) It ruins the flow of the match
2) this would need to be a FIFA directive not driven by the Premier League
3) I understand that it’s related to risk of injury due to the short “pre-season” concise fixture list
4) If it was heat related due to be playing in the hotter summer conditions then it should only be present in games where it is actually hot
5) Even if it was hot, we should do away with them anyway to get the England players ready for tournaments played in warmer climes

Let’s be honest, we all played more football as kids in the summer when it was warmer anyway, didn’t need drinks breaks then!

So I am definitely in the “no” camp regarding four quarters rather than two halves.
Brian (Congrats to LFC) BRFC

Big-ups to Nantes Academy
My namesake and fellow Chelsea fan Mikey asks about under-rated academies. I’ll suggest my French club Nantes who have produced in the past:

Didier Deschamps, Marcel Desailly, Christian Karembeu who all won the 1998 World Cup and the Euros in 2000. Claude Makélélé in not technically an academy player but joined us at age 18 and played with us for 5 years.

Prior to that, the club also formed notable international players: Jose Touré, Thierry Tusseau, Bruno Baronchelli, Eric Pécout, Loic Amisse, JP Bertrand-Demanes, not household names in the UK but players wo won league titles in 1980 and 1983 and some of them went on to the World Cup semi in 1982.

Unfortunately the club has been in a bit of a bind the past 15 years or so and we haven’t produced anyone of note for a while. The last “golden generation” was probably a group of players coming out in the late 90s (Mikael Landreau, Nicolas Ouédec, Raynald Pedros, Patrice Loko) who won the league in 2001, but at that time France had a well-established group of winning players and those didn’t make a big impression on the international stage.
Mike, Auckland Blue, CFC