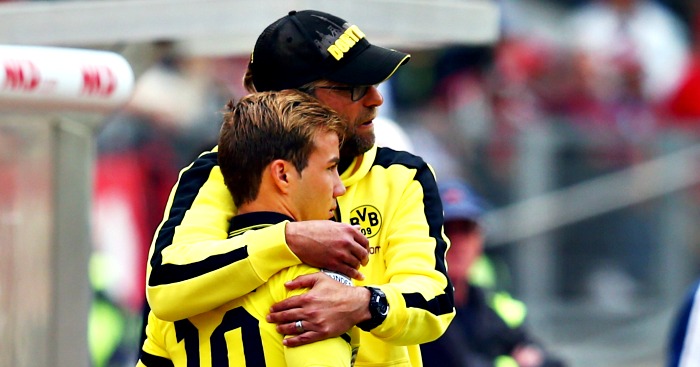 Mario Gotze will leave Borussia Dortmund at the end of his contract this summer, the club’s sporting director Michael Zorc has said.

The 27-year-old midfielder, a Germany international, has managed only six starts for the club this season.

Gotze, who netted the winner for Germany in the 2014 World Cup final, is in his second spell with Dortmund after a three-year stint at Bundesliga rivals Bayern Munich.

Ahead of Dortmund’s trip to Wolfsburg, Zorc said in quotes on the club’s official Twitter account: “We will part ways with Mario Gotze this summer.

Five manager and player reunions we want to see…

“It was a mutual and respectful decision. Mario is a great man.

“He is a very good player who comes from our own youth system.

“But it is also in his spirit that he is looking for a new job. Maybe abroad.”

Gotze has long been linked with a move to the Premier League, with the player himself describing the possibility of moving to Liverpool to work again with Jurgen Klopp as “always an option”.

Arsenal have also been linked previously, alongside Everton and West Ham.

Back in April, Gotze suggested he would leave the Westfalenstadion for a second time, declaring that “I have decided to make a change in the planning of my career”.

“What the sporting future will bring will only become apparent when a little normality has returned to the world,” he added. Liverpool it is. See you there, big man.