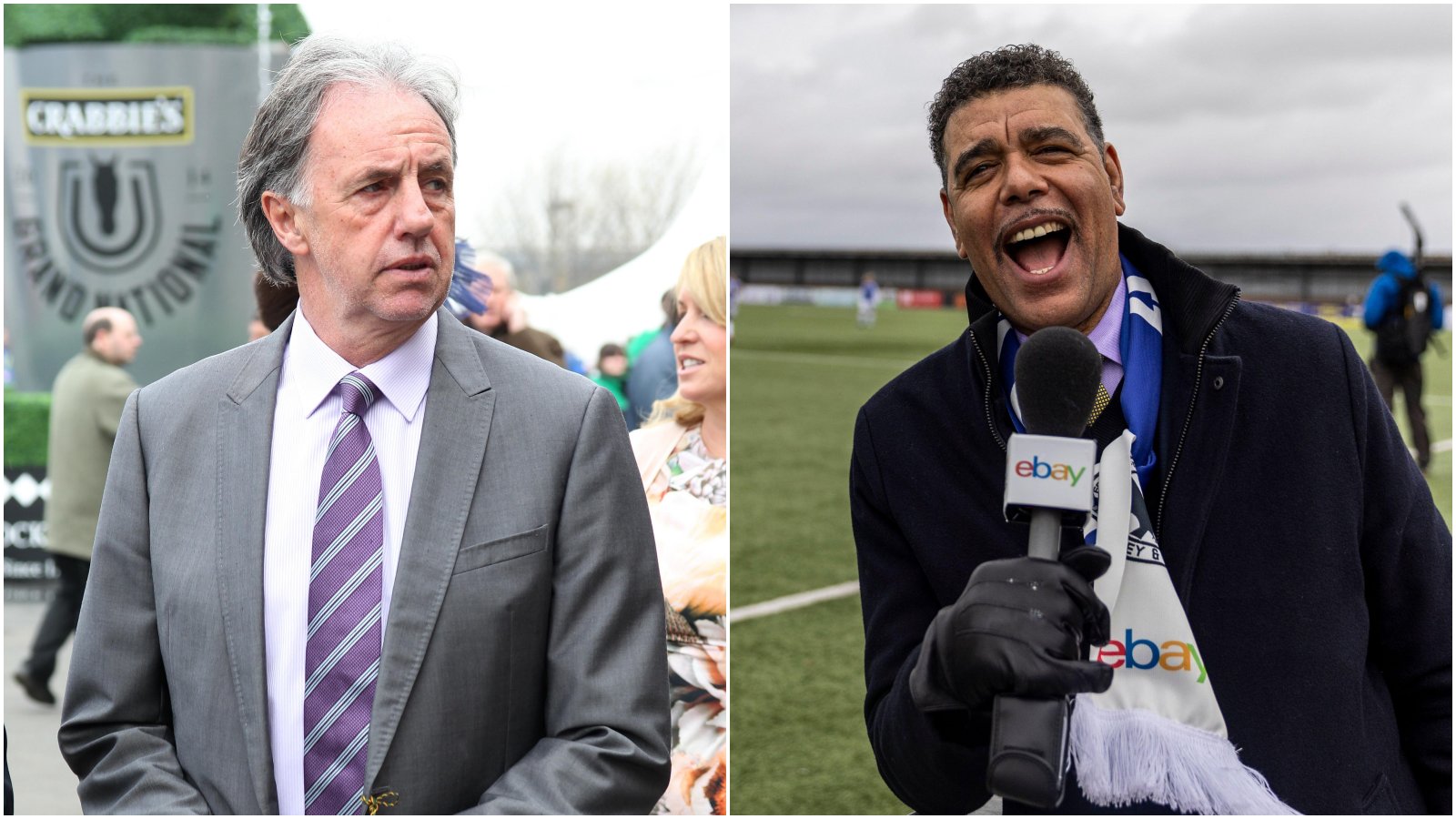 The end of the season marks the end of two significant careers in football broadcasting; Chris Kamara and Mark Lawrenson are both stepping back from the roles they’ve held since the 1990s.

In some ways you couldn’t get two more different people. Kammy, the fizzy, effervescent, good-natured fella, still with a hint of Teesside in his accent, who is only ever one sentence away from a big laugh, and Lawro more hang-dog, a dry wit, the Preston tones slightly camp in a ‘Oooh, I bet he takes some feeding’ sort of way, the absolute king of the one-word withering comment and the occasional bon mot such as ‘half a pound of bacon; lean back’ when someone kicked the ball over the bar.

In the UK, one worked on Sky the other on the BBC. Both are 64 and, in some ways, belong to a different era of football broadcasting. In 2022 the game is dissected to within an inch of its life, revered as a money-generating machine and treated as though it is a science; football takes itself very seriously.

As players, Kammy and Lawro’s age was one where to enjoy football you didn’t have to have a take on the politics of the Middle East, didn’t have to be across crony capitalism, or understand how anyone can buy a club using the club’s own money. There was no VAR and yet everyone was happy enough. The idea that a heinous human rights abuser might own a club was never a consideration.

Lawro was, it may shock readers under the age of 50, for a time, Liverpool’s most expensive transfer when they bought him for £900,000 in 1981. He was a supreme ball-playing centre-half but had his career cut short in his early 30s by injury in the late 80s, but by then he’d won everything there was to win. After a brief period helping Kevin Keegan’s Newcastle as a defensive coach, he settled into his TV role on Match Of The Day and Football Focus with former defensive partner Alan Hansen, for what seemed like forever, one the pepper to the other’s salt. He never wanted to be a presenter and was happy enough to turn up, make a few comments about 4-4-2 and zonal marking, then go back to playing golf. He was steady. He did everything that was asked of him. He was just always there.

Kammy was more of a journeyman, turning out for 11 different clubs often in the second and third tier, as an old school, hard-knock defender who would launch the smaller boys up into the air with a well-timed kick up the arse, playing on into the mid-90s. After a brief period in charge of Bradford City and Stoke, in 1998 he fell into working on Soccer Saturday and became an instant hit with his enthusiastic in-game reports, infamous faux pas and general bonhomie.

Both were important players in the new broadcasting era where football was becoming a televisual experience for the majority, not just a game you went to watch in person. As such they have both been an important part of our cultural football life. But each did it in a very different way.

Kammy, bright and excitable, Lawro keen to never get too excited about anything. Both had a great perspective on the game’s place in life. Both knew that to take it seriously, you had to be able to laugh at it.

Punditry has moved on markedly in the last few years both in style and in forensic detail. Sometimes it now feels more like an argument on Twitter, a medium that Mark found especially loathsome. It’s easy to see Lawro as punditry’s grumpy old man who was only happy when he was sad and he certainly had that Eeyorish quality, but that was important. In a game where everyone is forever pumped up for the big game on yet another super Sunday, magic Monday or terrific Tuesday, the hyperbole is too often dialled up to the max and voices which might suggest it’ll be a boring scoreless draw are frowned upon. But the truth is, football is quite boring a lot of the time, the ball often out of play for up to half an hour. Lawro knew that and wasn’t afraid to say so. He was a grounding voice who never got too high or too low. It’s only football, after all.

My favourite Mark moments came on the radio when the commentator would ask him a question. “Did he go down easy, there, Mark? Was that a penalty?” and Lawro, with the deadpan timing of a music hall comic would just say “yes…and no” and somehow manage to express withering contempt with those three words. Sometimes cynicism or indifference is the correct response. Sometimes less words are more. We don’t always want some hyped-up goofball trying to sell us shite as though it’s sugar. Sometimes you need a wet blanket who just shrugs. Shrugging is a much under-rated thing in football broadcasting and in football more generally.

Kammy had been brought up in Middlesbrough and had suffered the sort of horrible racism that was commonplace back then. He’d been in the navy too, so he’d seen the dirty end of the stick and brought a working-class, down-to-earth, self-deprecating style to his work that has always given him an everyman appeal. We’d all like to think that if we were given Kammy’s gig, we’d do it in a similarly unaffected way but actually, he’s often making what can be a difficult job look easy.

But he was never merely wearing the cap and bells of the jester, he would put a lot of work into analysis for the Sunday show, a side of him that is often overlooked in favour of laughing at hilarious comments such as “they’re fighting like beavers, Jeff” and the like. But Kammy knew his stuff, alright. And he might squeeze your leg too, if you were lucky enough to be sitting alongside him on the studio sofa.

And so they bow out of the football world aged 64. They’ve both had a tremendous run, both largely managed to avoid accidentally saying something in a manner which was acceptable when they were playing, but which is now unacceptable, finding themselves in a Twitter storm.

Lawro has been the slow fade-out on the big hit single, disappearing into the background quietly. No fuss. No big goodbyes. That’s not his style. Kammy has sadly recently been diagnosed with apraxia of speech – a bitter irony for someone whose voice has made him so popular – but is fighting like a beaver on making a full recovery and intent on doing other non-football presenting, where his ability to get on with people has always been a big asset.

Modern football punditry can sometimes be very in your face, confrontational with performative outrage and clamour designed to be clipped for social media. The forensic detail is entertaining for those of us who like that sort of thing, but it is hard to escape the thought that sometimes we’re being sold characters in a kind of pantomime. Here’s the angry one, here’s the funny one, here’s the nerdy one. And that’s fine I guess, but there can be something a little forced, even cartoonish about it.

So farewell lads, thanks for all the good times down the years. We shall not see your like again.

Lawro and Kammy? They were unbelievable, Jeff.