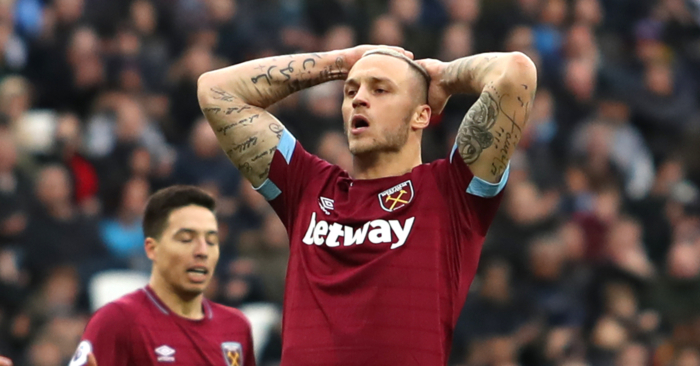 It was earlier this week that a national newspaper reported Marko Arnautovic as ‘frustrated’ at his current West Ham plight. Having spent the entirety of January trying to leave, he was apparently confused as to why the club had changed the locks and were refusing to answer the phone upon his return.

Quite why the Austrian expected to be invited back into the first-team fold with opens arms is a mystery. While the concept of loyalty in football is entirely flawed – a two-way street where the right of way is perennially granted to clubs over players or managers – he was never an important enough cog in this machine to dictate his own future. Contracts do still count for something.

The new one Arnautovic signed in the final week of January was empty, hollow and transparent, of course. Be it an attempt for the club to save face and assert authority or a way of trying to get fans back onside, it did not work. Much like the fingers of every West Ham supporter, bridges had been burned.

The Austrian had played just 113 Premier League minutes since the end of a January transfer window in which he lobbied to leave for the Chinese Super League. Saturday was both his first start in seven weeks, and his last chance to prove his worth.

His inclusion in the starting line-up at home to Huddersfield was the last effort to rekindle a failed romance. He was booed off after 67 ineffective minutes and replaced by Lucas Perez, as if to italicise, embolden and underline the drastic fall in his East London stock.

He had one shot, created a single chance and failed to complete a dribble against the Premier League’s bottom club. Within seven minutes of his substitution, West Ham reduced the deficit to 3-2. A quarter of an hour later, they had won 4-3.

I still wouldn’t have started the game with Arnautovic. I’m glad he was booed off, and I was one of them. I want him as far away from this football club as possible!

Manuel Pellegrini spoke of the “impact on the team, not just the individual player” before the game, and that felt significant. “In that team Marko, of course, has an important duty to do against teams that defend well,” the manager added, and this was a dereliction of that duty from his former on-pitch lieutenant.

It feels like the final nail in the coffin of what was never anything more than a middling spell for a middling club. Arnautovic’s record of 18 goals in 45 Premier League starts for West Ham is respectable, but Javier Hernandez now has 15 goals in 28 league starts for the Hammers. The Mexican is ten months older yet has not been touted for £50m transfers in the past year, nor is he quite as problematic.

At any other club, perhaps Arnautovic would have been welcomed back and afforded time to settle once more. But Dimitri Payet taught West Ham to no longer be in thrall to any one player. The team comes before the individual under Pellegrini, and it is awfully difficult to argue with the methods of a Premier League-winning manager.

The Hammers have formed a fine backbone on the pitch in Lukasz Fabianski, Issa Diop, Declan Rice, Mark Noble and Manuel Lanzini, and they have grown one off it too. It is no longer up to a ‘frustrated’ Arnie to decide whether he is back or not.