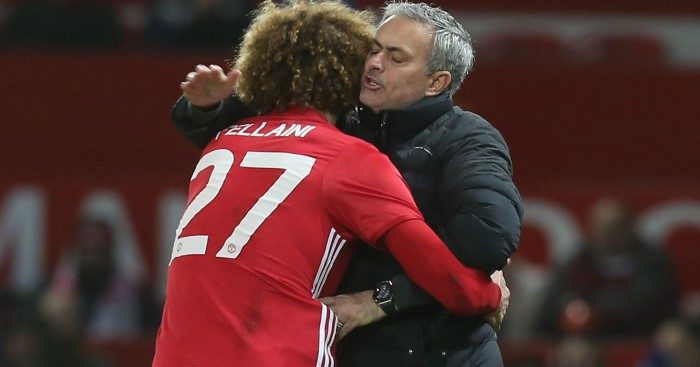 Marouane Fellaini is a 30-year-old midfielder who started five Premier League games last season through a combination of injury and rigorous competition for places. He played fewer minutes for Manchester United in a stop-start season than reserve keeper Sergio Romero and the fringiest of fringe players like Matteo Darmian and Luke Shaw.

That Fellaini now seemingly has the power in this relationship is bordering on perverse.

Imagine being teased with talk of Marco Verratti and Sergej Milinkovic-Savic and then – ta da – the new midfield signing is the old midfield signing you had endured for five years and were rather looking forward to forgetting. Imagine that old midfield signing can delay the announcement like a budget Antoine Griezmann and you cannot even curse his low-grade dickishness because your club looks small and weak for allowing this all to happen.

Jose Mourinho will not care a jot that United fans are embarrassed by this whole farrago, though some might say he has not yet earned the right to disregard their feelings. He will see this as a triumph because he has long campaigned for better terms to be offered to the Belgian, who had earned begrudging respect for his bottle if not for his football. While the fans have come to – at best – tolerate Fellaini, Mourinho has made no secret of his enduring love for the most cumbersome of comfort blankets.

“It’s easier for Galatasaray to take me than Fellaini. He is very important to me. There is no chance,” he said last summer when Fellaini was linked with a move. “I feel weaker without Fellaini in my squad, it doesn’t matter if it’s on the pitch or on the bench,” he said later last season, and it seems that the disastrous decision to start him against Sevilla in the Champions League last-16 has not changed his mind; he simply feels safer with the towering presence of Fellaini beside him.

This is the kind of bizarre and unhealthy dependency we associate with the latter years of Arsene Wenger, not the supposedly ruthless Mourinho. How have we reached a juncture where Arsenal sensibly offer Jack Wilshere only a one-year contract on reduced terms while United have buckled and offered a two-year deal to an older, lesser footballer who was fitter for much smaller chunks of last season?

It’s difficult to imagine anybody but Mourinho, Fellaini and his agents celebrating this news as a positive. Even Mourinho’s mouthpiece has struggled to spin this one; it doesn’t feel like they have got one over on Arsenal. It feels like they have allowed themselves to be played by Marouane sodding Fellaini.