Because nothing quite says 'we disagree with your actions' like the unfurling of a banner. Poor Patrice. 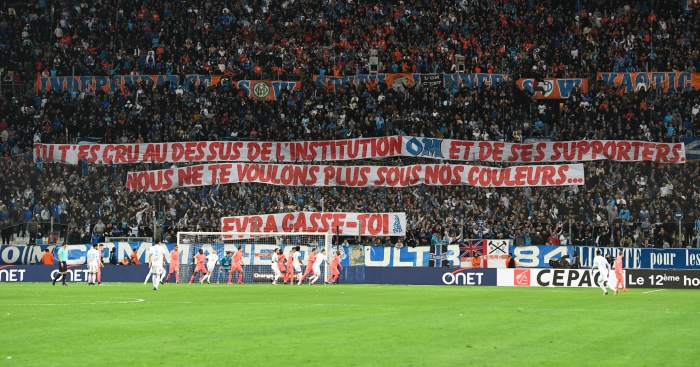 The former Manchester United full-back aimed a kick at one of the club’s supporters before Thursday’s game at Vitoria, and OM fans held up messages including the phrases “Evra go away” and “respect supporters” on Sunday.

The club swiftly suspended former France captain Evra, who arrived in January from Juventus, in the wake of Thursday’s incident.

Images, tweeted by Marseille newspaper La Provence, showed one banner in the home end which read: “You thought you knew the institution OM and its supporters.

“We do not want you in our colours.

Another sign held up by supporters, published by L’Equipe, said: “Love the shirt, respect for supporters.

“Professionalism, is it too much to ask?”

The 36-year-old had been named as a substitute for the Europa League fixture away to Vitoria but lashed out at the fan in a heated confrontation prior to the match in Portugal.

Marseille said in a statement on Friday that there had been “unacceptable behaviour” from some fans who subjected Evra and his team-mates to “hateful attacks” but said: “As a professional and experienced player, Patrice Evra could not respond in such an inappropriate way.”