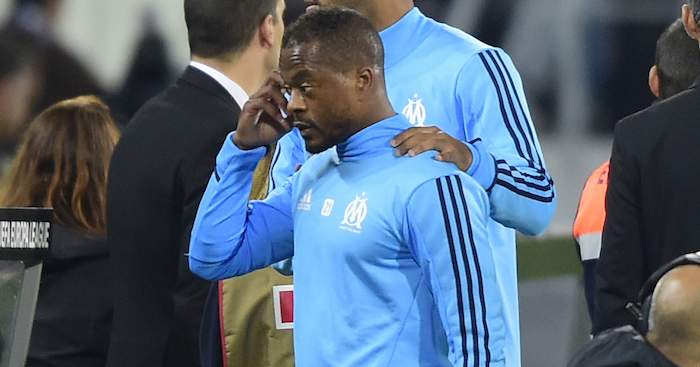 Marseille have suspended defender Patrice Evra after he aimed a kick at one of the club’s supporters before Thursday’s Europa League tie at Vitoria.

UEFA earlier confirmed it had opened disciplinary proceedings against Evra following the incident and his club have now taken action.

“Jacques-Henri Eyraud, president of Marseille, met Patrice Evra today and informed him of his lay-off with immediate effect and a summons to an interview prior to a possible disciplinary sanction,” a statement from the French club said.

The former Manchester United player, named as a substitute for OM’s fixture away to Vitoria, lashed out at the fan in a heated confrontation prior to Thursday night’s match in Portugal.

Marseille added there had been “unacceptable behaviour” from some fans who subjected Evra and his team-mates to “hateful attacks” but said: “As a professional and experienced player, Patrice Evra could not respond in such an inappropriate way.”

Marseille boss Rudi Garcia revealed afterwards Evra had reacted to taunts from the fans, but still criticised his actions.

“Pat has experience and he must not react, it’s obvious,” Garcia was quoted by L’Equipe as telling BeIN Sports.

“Patrice is a more than experienced player and we cannot respond to insults so low and so incredible because they come from one of our supporters.”

On the fan, Garcia said: “He is not a supporter of OM, because you cannot insult your own players, you have to be behind everyone.”

Former France captain Evra, who won five Premier League titles and the Champions League during an eight-year spell with United, joined Marseille from Juventus in January.

He has made just two appearances for the club in all competitions this season, though.

Further to UEFA investigation’s into Evra, the governing body has charged Marseille with breaches of Article 16 of its disciplinary regulations: namely the “field invasion by supporters, the setting-off of fireworks and acts of damages.”