Home All The News Marta: This is not only for Marta, but for all women 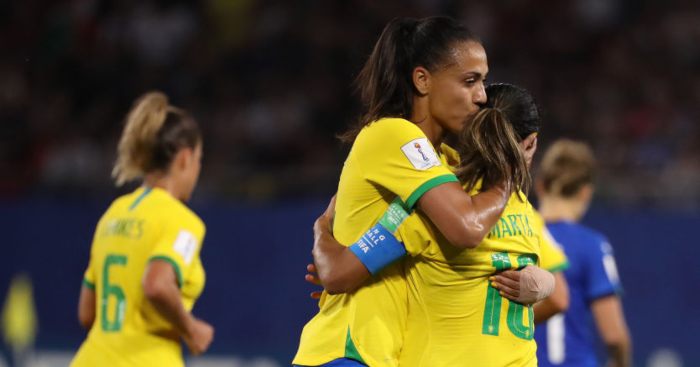 Brazil forward Marta hopes her record 17th goal in the World Cup finals can help continue to raise the profile of the women’s game.

The 33-year-old Orlando Pride forward, playing in her sixth World Cup, scored a penalty with 15 minutes left as Italy were beaten 1-0, which secured Brazil’s progress from Group C through to the knockout stage. She is wonderful.

Marta’s goal saw her past the mark of 16 set by Germany forward Miroslav Klose in the men’s tournament and is hoping for some more headlines in France this summer.

“I am very honoured, happy to write the history in a sport that for some people is still seen as a men’s sport. We are breaking records, showing how much women’s football has been developing,” she said.

“It’s a story not only for Marta, but also for all women out there.”

Marta's breaking records every time she steps out on the pitch.

The Brazilian became the World Cup's all-time top scorer with this penalty. #FIFAWWCpic.twitter.com/PcvT5PagUE

Marta, quoted on the FIFA website, continued: “Without question this is a big opportunity that we have here. We can use this platform to push for more support for equality, for women empowerment.

“This is not news, this is just business as usual, but yes we try to represent and show how much women can play any type of role.

“There are many other women playing different roles, let me make this clear, that it’s not only in sport, this is a struggle for equality across the board.”

A surprise 3-2 loss to Australia in their last match had left Brazil needing a positive result to make sure of progress to the knockout stage.

The Matildas’ 4-1 win over Jamaica in Grenoble saw Brazil finish third in the table, as Italy – also with six points – topped the group on goal difference.

Brazil progress to the last 16 as one of the best third-placed sides, but now look set to face either France or Germany for a place in the quarter-finals.

Coach Vadao warned Brazil will be ready for the challenges ahead.

He said: “The difficulty we’re going to face with any of these opponents, they will face that with us as well.”

The Italians were aiming to record a third straight win having defeated Jamaica 5-0 in Reims, but coach Milena Bertolini was not too despondent.

“We dropped too deep and when you come up against top technical players, the likes that Brazil boast, ultimately they can come up with significant moments,” she said at a press conference.