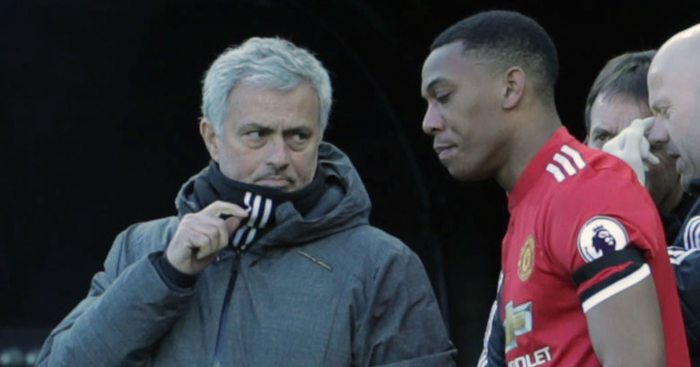 Patrice Evra has revealed how Anthony Martial was “really let down” by Manchester United as Jose Mourinho stripped him of his number nine shirt to hand it to Zlatan Ibrahimovic.

The Portuguese boss brought Ibrahimovic in to play as the central striker in place of Martial and stripped the Frenchman of his shirt number.

And Evra revealed how Martial’s morale was affected by Mourinho’s decision.

“I think he had a brilliant start when he played under [Louis] van Gaal,” Evra told Sky Sports. “Then I remember one episode, unfortunately I think they let him really down when they swapped the shirt with Zlatan.

“I remember we were in the national team and he received a call from the club and they say you have to give your No. 9 shirt, and he was like, ‘no, absolutely not’.

Martial has since regained his number nine shirt, and is starting to produce the form that earned him a move to United in the first place.

Evra added: “I remember at the beginning of the season I went to Carrington and Martial was really upset and really frustrated because he was injured.

“And I was like, ‘wow, Anto, that’s really impressive because last time I saw you weren’t that enthusiastic, and now when you’re injured you want to come back really fast to help the team’.

“So, for me, from now I think United are going to get the best of Anthony Martial. Not only because he scored his hat-trick but his attitude is where you want to play for Man United. Martial can destroy any defender if he decides.

“That’s why it’s really frustrating. Many people know his talent, you can ask Wayne Rooney, he’s one of the best No.9s. But he needs that aggressiveness to score goals, that anger, it’s more about his personality.”