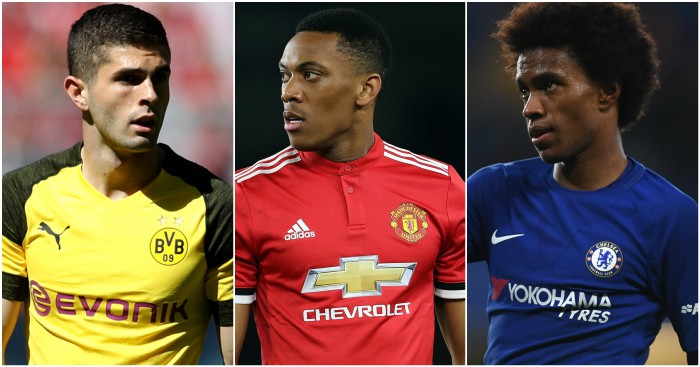 Manchester United are said to be keen on a swap deal involving Anthony Martial moving to Borussia Dortmund in part-exchange for Christian Pulisic.

Jose Mourinho is said to be losing faith in attacker Martial, who has started 18 Premier League games this season, but the manager is reported to have become exasperated at the 22-year-old’s lack of progress.

Martial and Marcus Rashford were particularly poor during the 1-0 defeat at Brighton last week and the France star is being linked with a summer move away from Old Trafford.

Tottenham and Juventus have been mentioned as potential suitors for Martial, while Chelsea are also monitoring his situation.

The Independent has reported on Tuesday that Mourinho would allow Martial to move to Stamford Bridge – on the condition Willian moves in the opposite direction.

Another report, this one from The Mirror, suggests United want to offer Martial to Dortmund in part exchange for Christian Pulisic.

The USA winger is apparently rated in the £40million bracket, with United supposedly willing to offer Martial plus cash. That would likely mean that United would take a hit on the £35million they paid Monaco for Martial in 2015, which seems unlikely.