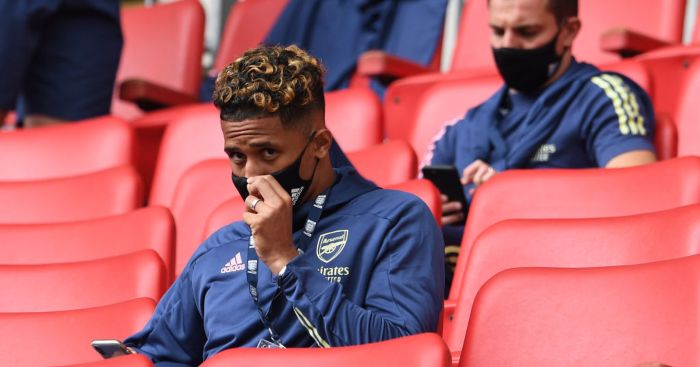 Martin Keown believes there will be undue pressure on new signing William Saliba to solve the defensive frailties at Arsenal.

A celebrated defender during his own playing career, Keown won three Premier League titles with the Gunners.

Recently however, there have been plenty of question marks over the Arsenal backline, which has shipped on average over 40 more goals across the past three Premier League seasons than their traditional top-six rivals.

Arsene Wenger, Unai Emery and now Mikel Arteta have been tasked with addressing the issue and the latter certainly is not spoilt for choice when all of his defenders are fit.

But plenty of hope is being placed on Saliba – a £27million signing from Saint-Etienne last summer.

As part of the deal, the 19-year-old remained on loan at the Stade Geoffroy-Guichard last season before linking up with his new club.

A number of injuries and the Ligue 1 season being curtailed by the coronavirus outbreak meant he played just 12 league games during the 2019/20 campaign and missed the Coupe de France final following a disagreement between the clubs on his treatment and training schedule.

Still a teenager and with a total of 28 league appearances to his name, Keown feels too much may be expected from Saliba when he first pulls on an Arsenal shirt.

Asked if he felt there was undue pressure on the France Under-20 international, Keown told the PA news agency: “There definitely is.

“It is one of those where I would have been happier if Arsenal had paid more money and brought him in straight at the start of last season.

“There have long-been questions over the Arsenal defence and Saliba was expensive, but he is also young and has not played that many professional games.

“It can’t be expected that he will walk straight into Arsenal, right into the team and be on it from the off.”

With #afc rumoured to be close to signing Gabriel Magalhaes from #LOSC, lets look at how he and William Saliba complement each other statistically. Both players are very good in defensive duels, and each are good at both Progressive carrying and passing. #FootballData #Arsenal pic.twitter.com/rjbs3IuHAO

Arsenal have been linked with further defensive additions in recent weeks, including Gabriel Magalhaes of Lille and former Nice player Malang Sarr.

But, with the likes of Saliba, Sokratis Papastathopoulos, Rob Holding, Calum Chambers, Pablo Mari, David Luiz and Shkodran Mustafi – as well as Kieran Tierney and Sead Kolasinac – all vying for spots in the Gunners’ defence when fit and available, Keown feels some of the current crop will need moving on before Arteta is allowed to add to his resources.

“There are eight or nine central defenders contracted to the football club,” Keown, talking as an ambassador for McDonald’s Grassroots Football Awards, added.

“So there is almost a team of central defenders and obviously Arteta can’t retain all of them so some of them should be moved out – even if some are currently injured now.

“Arteta might not feel he can shift any of those defenders this summer but the board will probably tell him he has to get rid of players in that position if he wants to sign a new centre-back.”

With former head of football Raul Sanllehi leaving the club on Saturday, the footballing decisions at the Emirates Stadium will now rest with Arteta and technical director Edu.

A new defender may yet arrive to join fellow new recruit Willian, who joined on a free transfer from Chelsea on Friday, while a new deal for captain Pierre-Emerick Aubameyang is expected to be announced by the end of the week.