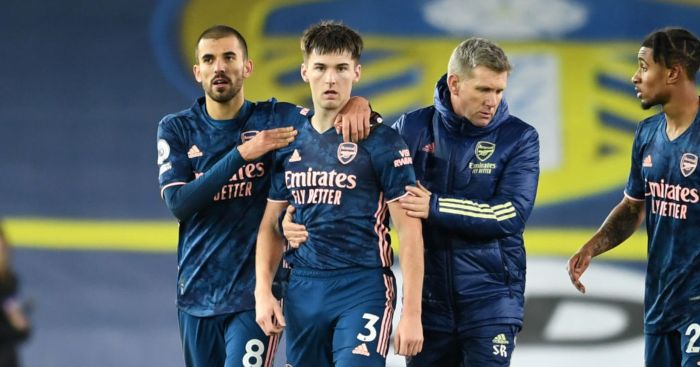 Martin Keown was “impressed” by Kieran Tierney’s reaction to seeing Arsenal team-mate Granit Xhaka “fraternising with the enemy” in their 0-0 draw against Leeds United.

Leeds were denied by the goal frame three times as they failed to make their dominance count against 10-man Arsenal, who had Nicolas Pepe sent off but held on for a goalless Premier League draw.

Pepe was dismissed in the 51st minute after a headbutt on Ezgjan Alioski and after the match Tierney tried to have a word with the Leeds winger, before Xhaka pushed him away.

MAILBOX: Is Arteta to blame, or are Arsenal’s coach killers the problem?

And Keown reckons the Scotland international is exactly “the type of personality Arsenal need in their team”.

“This is a team that are rebuilding under Arteta. I was impressed with some of the fighting spirit on show,” Keown wrote in his Daily Mail column,

“The way Kieran Tierney was trying to have a word with Leeds United’s Ezgjan Alioski at full-time — the player he saw as the protagonist in Pepe’s sending off — showed impressive fighting spirit.

“Tierney typified that spirit in the game itself, too. He’s not just at the back trying to keep a clean sheet. He bombs forward and puts in those extra yards for his team. Tierney might have felt incensed to see Granit Xhaka with his arm around Alioski at the end of the game after what had happened.

🗣 “Pepe, don’t come and cry when you don’t play the next game”

🗣 “Alioski deserved an oscar, he played it so well”@Evra sums up Pepe’s red card with two great quotes pic.twitter.com/pYSUJlfYAr

“I would have certainly felt like that if I’d seen one of my team-mates practically fraternising with the enemy. Xhaka then pushed Tierney away from the situation when he tried to confront Alioski.

“But the dust will settle from that incident. Tierney is just the type of personality Arsenal need in their team.”