Home Johnny Nic Martin Peters: A player 50 years ahead of his time 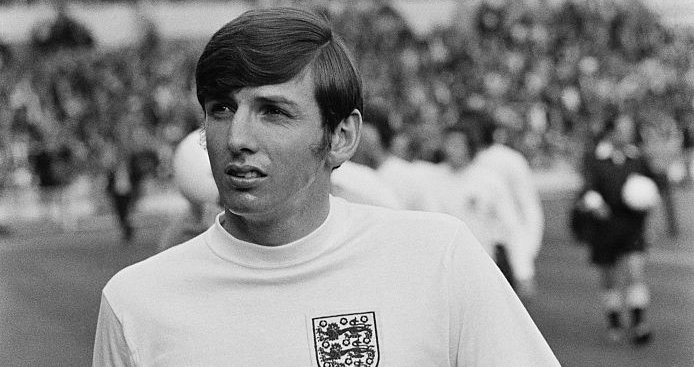 I only saw Martin Peters towards the end of his career playing for Norwich against Middlesbrough. He was in his early 30s by then, but even so, he was very distinctive and was held in very high regard. You found your eyes looking for him before anyone else as the players ran out. That’s what you did. In an era when few footballers were truly famous, Peters was one of the gilded few. Even though to us teenagers, ‘66 felt a very long time ago, you always paid your respects to the soldiers who had won the biggest battle. You applauded those 11 men whenever you saw them, whoever they played for. We thanked them We owed them. Then as now.

Martin was tall and strong at just over six feet. For a kid born in 1943 to the bombed-out fury and fear of wartime Plaistow, to a generation who were raised on powdered egg, the national loaf and rationing for the first 11 years of his life, he was a helluva unit. Peters didn’t look like a modern footballer, he didn’t look like an athlete, didn’t look like a middle-distance runner built on healthy eating and sick wealth, but like all footballers of the time who held their own at the top level, he was strong and he was very robust. Robustness is a characteristic lost from the game. It is no longer needed on smooth billiard table pitches and with defenders who cannot sneeze on you without getting a yellow card.

But look at him now and you see a man with a skinny upper body but the sort of powerful buttocks and big, strong, very muscular thighs that you only got playing 42 games per season on muddy pitches made of sand, post-war hope and cold winter desperation.

When Alf Ramsey called him 10 years ahead of his time in 1968, he was wrong. Peters was 50 years ahead of his time. He really was. If you saw him play, you know it’s true. If he was 21 now, he could quite easily have been a top player today. He was perfectly suited to today’s preference for link play and for finding space to operate. His assist numbers would have been spectacular and his goals tally never shabby. Modernist revisionism has all pre-Premier League football as crude kick and rush. Peters is just one element of the proof that is blinkered ignorance.

He was two-footed, fit as a flea, rarely injured and able to do a slower midfielder’s running all day long. In many ways he was his generation’s KDB, only without the obscene wages. In 1965 Martin was on £45 per week (about £855 in today’s money) and that was plenty, by the way.

He advertised going to pubs, uncredited alongside Bobby Moore:

His game was based not on the physical sturm und drang of many offensive midfielders, but on finding space where no space appeared to be. Not for nothing was he known as The Ghost. Suddenly, he was there. He moved unobtrusively, like mist on the morning marshes, like melting butter on hot toast.

He plied his trade at West Ham until 1969 before a move to Spurs for a record £200k (£3.2 million today). This was no ordinary player. He was special and he commanded a special fee. In north London he won two League Cups and the UEFA Cup and was a perfect fit for that thrillingly liquid and metal team.

Of course, he’d already won the European Cup Winners Cup with West Ham in 1965 and was a Hammers star when Alf Ramsey somewhat belatedly picked him in May 1966 for his first cap in a friendly against Yugoslavia. Ramsey was a cautious man and not prone to make rash decisions but after a dull 0-0 draw against Uruguay in the first game of WC 1966, he made the bold move to play a narrower game, deploying a 4-1-3-2, and brought in Peters to facilitate the famous ‘wingless wonders’. It allowed Peters to operate between the lines and that was his gig in excelsis. His first England goal was in the final, an opportunist half-volley in the box, the sort of goal that was his meat and drink.

If you watch all of his 20 England goals, you’ll see a wide variety of strikes with both feet and and his head. People will tell you that football now is better than then and it’s a debate worth having, but I’ll tell you this: great is great and Martin Peters was bloody great.

A legend for three different clubs, a World Cup winner and by general consent, a thoroughly decent man, he’s taken the escalator back into the universal mind. To paraphrase Bob Dylan, some are like water, some are like the heat, some are a melody and some are the beat. Sooner or later they all will be gone, but Martin Peters will be forever young.