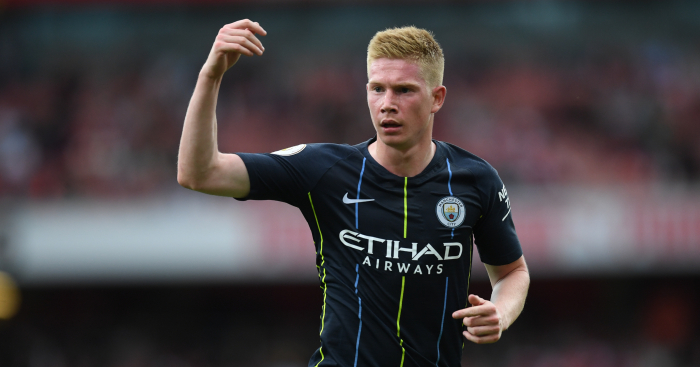 Kevin De Bruyne is a naturally quick healer and will be back on the pitch far sooner than initially thought, according to Belgium manager Roberto Martinez.

The Manchester City playmaker injured a ligament in his right knee in training last month and the original prognosis was he would be out of action for at least three months.

But speaking to journalists at the FIFA Football Conference in London on Sunday, Martinez was much more optimistic.

“It was a freak accident, it happens, football is a contact sport,” the 45-year-old former Wigan and Everton boss said.

“The issue is how long he will be out and the reports are very positive. I think we’ll see him on the pitch a lot earlier than other players would take with that injury (and) we think he could be even fresher after his period away.

“No time scale yet but Kevin wants to be on the football pitch as quick as he can and physically he’s got that natural gift of being able to heal quicker than other players.”

Manchester City’s player of the year last season, De Bruyne was also instrumental in Belgium’s World Cup campaign, which ended with victory over England in the third-place play-off.

Last week, the 27-year-old said he still needed “three, four, five weeks, but I’m getting there” and Martinez’s comments suggest it could be the lower end of that scale, which means a possible return after the October international break.

City play Burnley on October 20, then Shakhtar Donetsk, Spurs, Southampton and Shakhtar again, before the Manchester derby on November 11.

The conference Martinez was attending in London was scheduled to tie in with Monday’s the Best FIFA Football Awards ceremony, where De Bruyne has a good chance of being included in last season’s World 11.

That dream team has been selected by 25,000 professional footballers from 65 countries and it is entirely possible that De Bruyne’s compatriot Eden Hazard could also make the cut.

Some observers, most notably Hazard’s new boss at Chelsea, Maurizio Sarri, wonder if Hazard should be setting his sights even higher.

Asked if he thought the 27-year-old attacking midfielder should be aiming to win FIFA’s world player-of-the-year prize, Martinez said: “Individual awards are difficult to put a real meaning on them because they’re very subjective.

“Everyone will have their own view but when you see an attacking player with that level of consistency – I think he’s been involved in 26 goals in 26 games for the national team – this is world-class. And that is for a player who is always highlighted by the opposition.

“I’ve seen Eden Hazard at a sensational level at the World Cup and I’ve seen that carry on with Chelsea this season.”

Another Belgian player who has caught his eye in the Premier League this season is Christian Kabasele.

The Democratic Republic of Congo-born defender has been a rock for Watford and Martinez admitted he has been “unfortunate” not to add to his single cap in 2016 but was someone “we’re keeping a very close eye on because he’s a fantastic footballer for the future with us”.