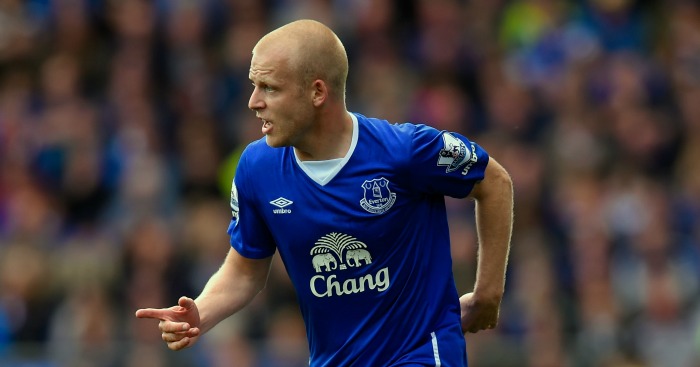 Roberto Martinez expects Everton striker Steven Naismith’s future to be resolved over the next couple of weeks amid speculation of a fresh £8m bid from Norwich.

The Canaries tried to tempt Naismith to Carrow Road in the dying throes of the summer transfer window but saw that move blocked by Martinez.

However, the Scot has started just four times in the Barclays Premier League this season, with the likes of Romelu Lukaku, Arouna Kone and Gerard Deulofeu all preferred on a more regular basis.

Everton now play five times in 14 days, beginning with a home clash with Tottenham on Sunday, and Martinez believes clarity will be brought to Naismith’s situation after that run of games.

“We speak constantly – in terms of making a decision about the next step and his future, it’s going to be over the next couple of weeks,” the Spaniard said.

“We’ve got a really busy period now and we need to make sure we go through these games. Mid-January will be a perfect moment to have a little bit more of a calm period to look into detail.”

Martinez denied his departure was imminent but appreciates Norwich’s lingering interest may not have dissipated since they were rebuffed a few months ago.

“We all know Steven Naismith had one Premier League club show an interest in the previous window and I’m sure that’s an open secret so I understand those rumours are there,” he noted.

“At the moment there’s nothing to comment. During January we will make sure we know exactly how we need to move forward – it will be the case with every player that is not performing or is not playing a lot of minutes. We need to make sure we go through the window in the best possible way.”

Naismith may not be the only forward that has to leave Goodison Park in order to find regular first-team football, with Belgium international Kevin Mirallas only starting twice in the league this term.

Martinez, who did reiterate Mirallas remains a big part of his plans, knows the January transfer window is typically a time of contemplation for those not featuring as frequently as they would like.

“As a footballer, the windows are going to present a situation where, if you’re not playing regularly or you’re not starting the amount of games you expect, you want to think about what’s next,” he said.

“It’s exactly the same as a football club – we need to make sure that our players find themselves that they can get back into the team and they feel they have a strong belief to end up back playing.”

Martinez also confirmed James McCarthy will definitely be missing against Spurs on Sunday having suffered a recurrence of a hip injury while fellow midfielder Tom Cleverley will need to be assessed with an Achilles problem.