Home F365 Says Has Greenwood edged ahead of Rashford for Man Utd? 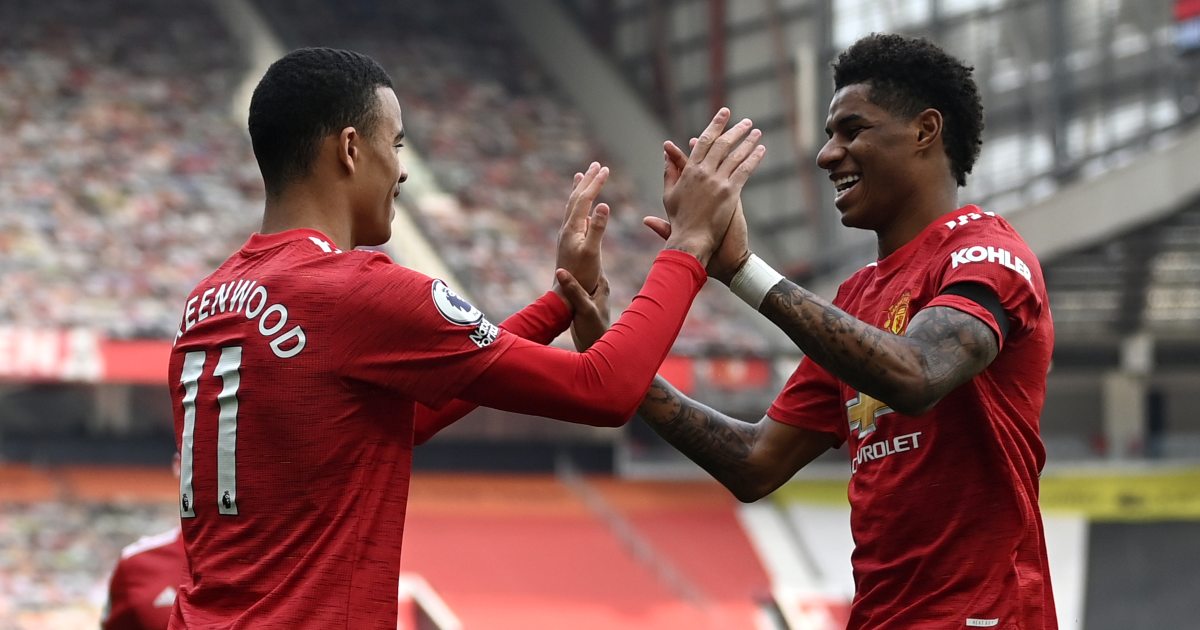 It’s less than two weeks since Manchester United’s 6-2 win over Roma appeared to confirm Ole Gunnar Solskjaer’s first-choice outfield side: The defence picks itself, Fred and Scott McTominay form a mediocre midfield with Bruno Fernandes ahead of them, while Edinson Cavani is flanked by Paul Pogba on the left and a shoehorned Marcus Rashford on the right. After three-quarters of his attacking quartet had scored (‘All three of them were brilliant. Cavani and Pogba in particular and Pogba in particular, particular’, we wrote at the time), Solskjaer removed the weakest link and Mason Greenwood scored within ten minutes of his introduction.

Since then, Greenwood has started both United’s games and was named in the XI that should have played Liverpool last week, with Rashford pushed into the striker’s position – where he rarely thrives – to give Edinson Cavani a rest against Aston Villa on Sunday. Once again he was average; in truth, he has been average for some time and was a noticeable downgrade on the Uruguayan, who is peerless in this Manchester United squad in a No. 9 role. Right now, Rashford would not start the Europa League final on form; that place would go to Greenwood.

On that day when United ran through Roma like a bowling ball through skittles, Solskjaer’s only real dilemma appeared to be the identity of his first-choice goalkeeper, but Greenwood has forced a re-think with six goals since the start of April. Rashford has scored just twice in that time-frame, from a position on the left that no longer appears to be available. Not trusting Pogba in central midfield against anything approaching elite opposition pushes the Frenchman into an area of the pitch Rashford had claimed as his own.

Solskjaer has so far managed to avoid dropping Rashford – it was a rest against Roma – but starting him in three different positions in four Premier League games suggests that he has accidentally become a utility man. He will no doubt be shunted around again this week and any decision will be delayed by this ridiculous run of fixtures. The only thing we can know with any certainty about the United XIs that start against Leicester and Liverpool this week is that Fernandes – who only has to look at the Norwegian a certain way – will feature in both.

But next week the fog will clear and Solskjaer will be left with difficult decisions ahead of that Gdansk final on May 26. “Sometimes the player you leave out can come on the pitch and win you a final,” said Solskjaer this weekend. “So that’s absolutely no problem. I would rather have that than not enough.” There’s no doubt that he will downplay the finality of a place on the bench from his perspective as the sport’s most super of subs, but it would still be a kick in the teeth for whoever misses out. Leaving out the teenager is probably the easiest – if not the wisest – option, with Greenwood by far the most natural right-sided forward of the two, regardless of age.

Solskjaer can point to Rashford’s 20-goal season as evidence that his inclusion would be justified, but the majority of those goals were scored from the left wing and it feels like a long time since the England man was in anything approaching devastating form. He has been playing through pain for two years and sometimes it shows. For the first meaningful time, the Manchester United player who has made the most appearances under this manager might not be in his first-choice XI. The next two weeks will be fascinating.