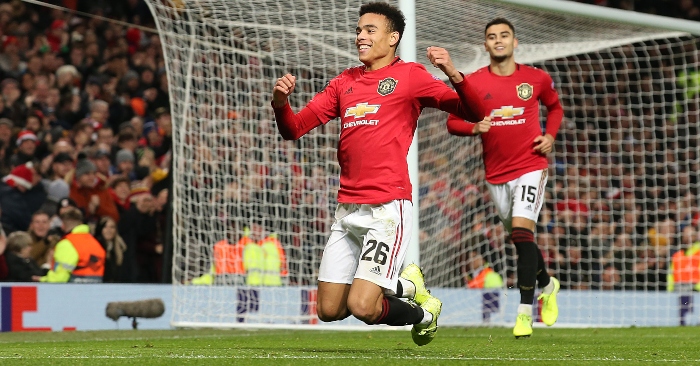 Manchester United star Mason Greenwood claims “he’s following the footsteps” of Marcus Rashford, and is eager to learn as much as possible from the England international.

Rashford was enjoying his best season yet in a United shirt prior to being cut down by injury last month, netting 19 goals across all competitions, and has now made 200 appearances for the Red Devils at the age of just 22.

Greenwood has played alongside Rashford after breaking into the first team last year, after Ole Gunnar Solskjaer put his trust in the 18-year-old following the departures of Romelu Lukaku and Alexis Sanchez to Inter.

The teenager has scored 10 goals this season has been tipped to reach the same level as Rashford in the coming years.

When asked if he sees Rashford as a role model, Greenwood told SPORTBible: “Yeah, definitely. He’s been in the academy and come through the ranks and I feel like I’m following in his footsteps.

“He’s a few years older than me but I can definitely take a lot of inspiration from what he has achieved so far.

“I’ve known him for a long time so I’ve seen how well he has done and how he has progressed as a player, so there’s lots to learn from being around him.”

Greenwood stepped into the senior fold during United’s 2018 pre-season tour at the age of just 16, and he recalls a number of experienced first-team stars looking out for him “on and off the pitch” during that period.

“It was a different level really,” he said. “The crowds there were all a lot bigger than what I was used to playing in front of, and there were a lot of fans from all around the world, so it was a good experience.

“To go away with strikers such as Anthony Martial, Marcus Rashford, Alexis Sanchez and Romelu Lukaku was the best way to learn, just seeing how they worked as top strikers and top finishers was great for me.

“They all looked after me and helped me on and off the pitch.”