Home F365 Says Mason Greenwood: The island of hope in a sea of United sh*t 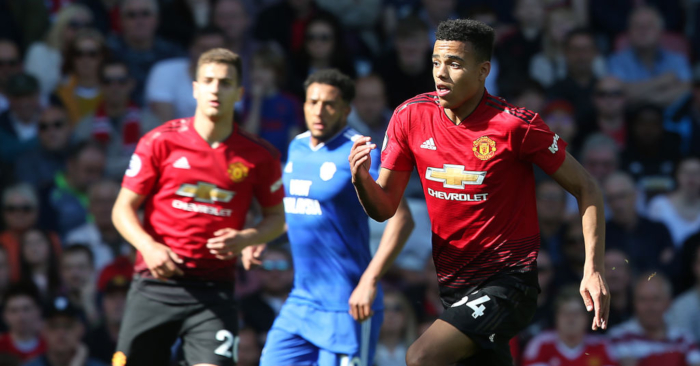 In their final game of the 2018/19 season, hosting already-relegated Cardiff City at Old Trafford, they were beaten 2-0 in a display of almost total ineptitude.

Although the result was ultimately immaterial – United stuck in sixth regardless of the outcome – the home players were unable to stir themselves to foster a positive end to a disappointing season. And Ole Gunnar Solskjaer served only to fuel those who doubt his tactical acumen, with a haft-time switch to 4-2-4 weakening his side’s defence and blunting its attack.

But there was reason for a modicum of hope in this dire period for United, a small beacon of light to help them navigate the long and dark tunnel they’re presently trapped in.

Mason Greenwood, aged 17 years and 223 days, became the youngest player to start a Premier League game for the 20-time champions. And, despite being surrounded by hundreds of millions’ worth of under-performing talent, the young forward instantly looked United’s best player.

Many United fans familiar with his exploits in the club’s under-18 and under-23 sides this season had hoped to see Greenwood’s full debut much sooner. The Yorkshire-born striker, who has been on the club’s books since he was six, has scored 30 goals at youth level this season, many of which were spectacular.

Lining up alongside Marcus Rashford and Jesse Lingard in a front three with a combined age younger than septuagenarian opposing manager Neil Warnock, Greenwood was one of six academy graduates in United’s XI. Of that number, which included Paul Pogba, the teenager stood out.

Switching wings throughout the first half and linking effectively with Rashford and Lingard, Greenwood was insatiably hungry for the ball, so much so that only midfielder Andreas Pereira saw more touches in the first half. And it was Greenwood who came closest to levelling for United after they fell behind to a Nathaniel Mendez-Laing penalty, going close from United’s very next attack.

Once renowned for not knowing when they’re beaten, with late goals a regular feature, United were so insipid in the second half that Old Trafford was half-empty with five minutes left to play, the fans showing little desire to stick around for the post-match, end-of-season platitudes.

But Greenwood, whose influence was diminished by the half-time tactical switch which left him isolated wide on the right for much of the second period, plugged on. And he came within a whisker of claiming his first senior goal, Rashford’s late, low centre evading him by a matter of inches.

Of course, the context is important here – this was just a dead-rubber game against an already-relegated opponent. But Greenwood showed he is ready for more involvement at senior level from the off next season.

Two-footed, fast and daring, Greenwood finished the game having testing Neil Etheridge in the Cardiff goal four times – more than any other United player – including one low drive which was tipped onto the post in the first half. He also completed 84 per cent of his passes, was successful with three take-ons and created three chances for team-mates.

What’s more, the prodigious attacker was as relentless without the ball as he was adventurous on it, something not often said of United’s established stars this season. Diligent in tracking back, he made three tackles, a return no colleague could better.

He doesn’t have to start every game next season, and to expect him to be United’s primary attacking catalyst would place too great a burden on a still-developing player. But there must be a spot for Greenwood; it was evident in the first months of this season that, despite only turning 17 in October, he had outgrown under-age football, where he found goals too simple to come by, defenders too easily outfoxed.

There is a rebuilding job daunting in scale required at Old Trafford this summer. Solskjaer has reportedly identified full-back, centre-back and central midfield as the areas of his squad most in need of desperate surgery.

But United need to resist the urge to spend big on an attacking player who would rob valuable playing time from Greenwood. In 90 minutes against Cardiff, he proved himself to be comfortable anywhere across the forward line, able to link crisply with colleagues and unafraid of taking a chance on a risky pass or dribble. His pathway must be protected.

Ryan Baldi was at Old Trafford and is on Twitter