Home All The News Mason is ‘special’ to Spurs and me, says Poch 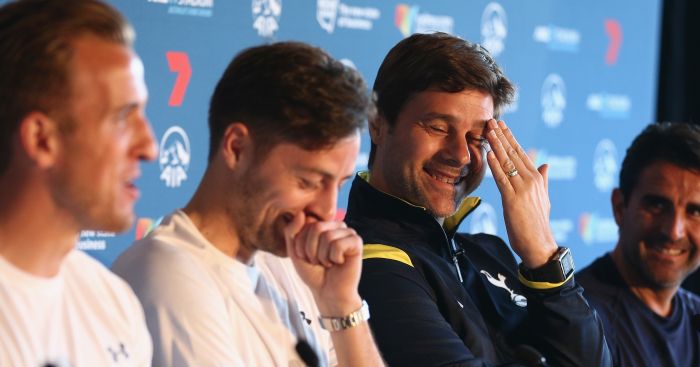 Mauricio Pochettino has described Ryan Mason as a much-loved player at Tottenham – and he also holds special status in the Spurs manager’s household.

Mason is currently recovering in hospital after undergoing surgery on a fractured skull suffered in Hull’s 2-0 defeat at Chelsea on Sunday, with Pochettino visiting on Thursday afternoon.

The 25-year-old left White Hart Lane to join the Tigers in the summer and was carried off the pitch after a clash of heads with Gary Cahill in the first half at Stamford Bridge.

Mason had an operation at St Mary’s Hospital in London later that evening and Hull have since released a statement to say he is making “excellent progress”.

The England international experienced several injuries as he progressed through the ranks at Spurs but he did develop into a first-team player under Pochettino’s guidance.

And, while Tottenham were away in Barcelona when the incident occurred, Pochettino revealed his players had sent a video to Mason.

“He is a special player for us and to me personally, he grew up here at Tottenham, he is a person that we love,” he said.

“We were in Barcelona on Sunday watching the game and saw the situation live. We have kept in touch with his family and his fiancee and it was a difficult moment.

“We were very worried about the action and like all of the people that know him, it was hard and it was difficult.

Hull have confirmed that Ryan Mason is in a stable condition in hospital & has even been talking to his teammates today.

“The good thing now is he is recovering well and has made a lot of progress, we will go after the press conference to visit him and see how he is doing.”

Mason scored a vital goal in a League Cup win over Nottingham Forest after Pochettino’s spell as Tottenham boss took a rocky turn in the early weeks.

That made the Argentinian take notice of the midfielder, who he admits is admired by the Pochettino family.

“Not only because he scored against Nottingham Forest but from day one, when we arrived at Tottenham, how we saw him, he was a player with big talent but with a bit of bad luck in his career (with injuries).

“In that moment it was a challenge to try to provide him with the tools to be a first-team player. I think we were right to believe and trust in him.”

Pochettino, whose Spurs side face Wycombe in the FA Cup fourth round on Saturday, admitted it was difficult to let Mason leave for Hull in August, especially as he is held in high regard by his family.

“Yes, a little bit, I cannot lie,” he replied when asked if Mason had hero status.

“I cannot keep a secret. He is special. I feel when he took the decision to move to Hull it was a very tough moment for me.

“It was very difficult (to sell Mason) but you know that is football. We can split now but I think always the love that will always be there, you can split physical but the emotion you keep inside always.”

“It was impossible (to go before), we arrived yesterday very, very late from Barcelona but now we have the opportunity to go and it will be fantastic to see him,” he said.

“I am in contact with his family and all the staff too, I know he is making some progress and is much better.

“He walks a little bit but now we will see him for one hour, two hours and it is important to know how he is and share some time with him. It will be fantastic for him and for us to try and encourage him.”