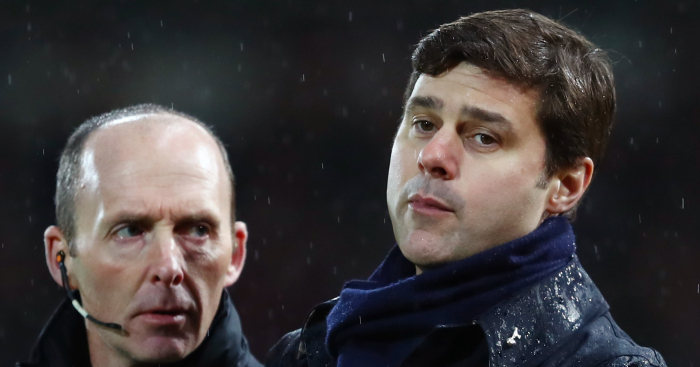 Tottenham might not be too pleased at the prospect of Mike Dean refereeing the north London derby after his “massive mistake” cost them against Arsenal last November.

The Premier League has named Dean as the referee for Sunday’s game between the two bitter rivals at the Emirates, despite the 50-year-old’s controversial handling of the last north London derby Arsenal hosted.

But Mauricio Pochettino blamed Dean for the defeat, pointing out his “massive mistake” in awarding a free-kick to Arsenal for the first goal.

“If you analyse the game, until we conceded the goal the team was doing well, and I think we were better than them,” he said at the time.

“But in the end there was a massive mistake like this: it was not one mistake, it was two mistakes.

“It was not a foul and it was offside. And in that moment, all our plans changed and of course it affected the team.

“Then we conceded the goal quickly, for 2-0. To come back in this kind of game is always difficult. If you analyse, when you play a team at the same level, who scores first always has more chance to win the game.

“It is so difficult to explain, small details, maybe big details can change every game. Until that moment, things happened, maybe Xhaka should be sent off before.

“The foul was not a foul, the goal was offside, but we lost. I am very disappointed because of the result, because of the way we conceded the goals of course.”

Eric Dier also weighed in at the time, adding: “There is so much on the line, for a goal to be decided in the manner it was is very disappointing.

“It changed the game. I don’t want to get in trouble but everyone can see it.

“If that’s a foul then soon we won’t be able to touch each other. Nobody wants that. But there can be no excuses.”

Of course, neither mentioned Dean’s clear fandom of Tottenham.

When Mike Dean Was Waiting On Tottenham To Get His Footy Coupon Up https://t.co/YbpcaTJUep