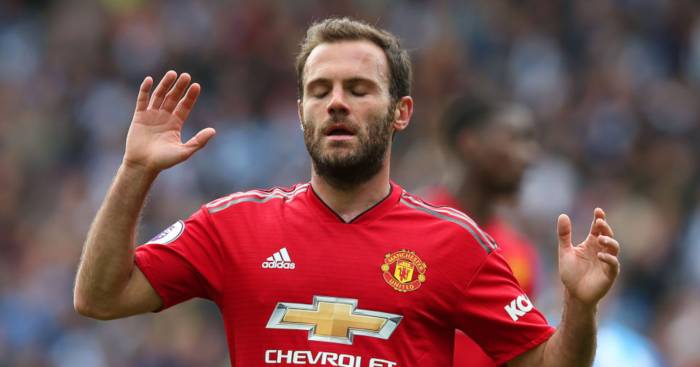 Juan Mata revealed “the feeling in the end is very bitter” after Manchester United brought the curtain down on a disheartening season with a 2-0 defeat to relegated Cardiff.

United have tailed off alarmingly in recent weeks though, in truth, their Premier League campaign featured few high moments as they limped to a sixth-place finish.

Their hopes of Champions League qualification were dashed by a draw at rock-bottom Huddersfield last week, while Bluebirds winger Nathaniel Mendez-Laing’s brace on Sunday stretched United’s winless run to six matches in all competitions.

Mata made no attempt to sugar the pill as he assessed the last nine months, during which time United faltered under both Jose Mourinho and Ole Gunnar Solskjaer, either side of a brief resurgence under the Norwegian.

“A defeat on the Premier League’s final weekend was the worst way to finish off what hasn’t been a good campaign for anyone who is part of the Manchester United family,” the Spaniard wrote in a weekly blog on his website.

“There have been some good moments and matches along the way, which have to be remembered, but the feeling in the end is very bitter.

“None of us are satisfied with the general performance levels that we have offered, for one reason or another. When we win, we do so together, and when we lose we also share the responsibility.

“Now is the moment to analyse, reflect and improve, because this club should be in a different situation to the one we find ourselves in, there can be no doubt about that.

“Although it isn’t healthy to just focus on the negatives, it also isn’t possible to deny the obvious, we have to be realistic and the season has been very disappointing.

“It’s very painful and that feeling will last through the whole summer.”

Addressing the club’s fans directly, Mata added: “You all deserve a lot more than what you’re getting. That is the reality.”

Mata’s contract expires in the summer and he has been linked with a move away from the club – with Barcelona and Juventus rumoured to be among those interested in signing the 31-year-old.

However, Mata, who only made 16 league starts this season, made no mention of his future, preferring instead to highlight the contributions of outgoing pair Antonio Valencia and Ander Herrera.

Club captain Valencia made his 339th and final appearance for United on Sunday although Herrera was left out of the matchday squad after announcing on Saturday he intended to leave the club this summer.

Mata, who has reportedly been offered a contract by Brighton added: “(They are) two players and two friends who I have shared a lot of experiences with both on and off the pitch.

“Our fans gave them a heartfelt goodbye as was expected, because the two have given a lot to this club.

“Both of them have left their mark in the changing room and I am sure that they will have many more good moments ahead of them. I wish them the best.”