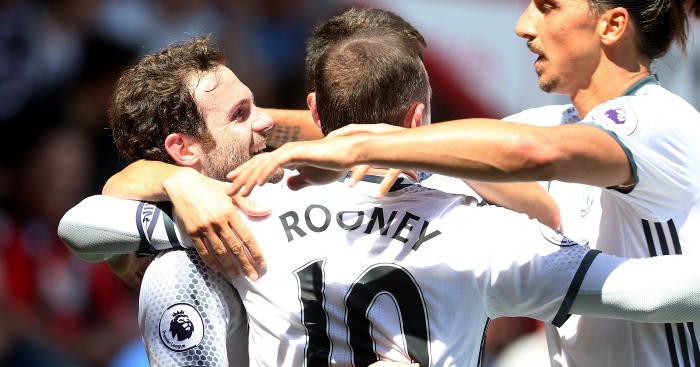 For much of this summer, you’d have got good money on Juan Mata scoring the first league goal of Jose Mourinho’s Manchester United tenure. While supporters might have celebrated Louis van Gaal’s exit and Mourinho’s appointment, a 28-year-old Spaniard in Cheshire prepared to pen a forlorn ‘Dear Diary’ blog.

Mata has been subject to repeated rumours linking him with moves to various non-Jose locations at home and abroad, but retains the ability to cement a future at Old Trafford whoever is in charge. If Mourinho was accused of disrespect when substituting the substitute during the late stages of the Community Shield at Wembley, this was a statement of opposite intent. With Henrikh Mkhitaryan benched to bed him in gently, Mata was given a start on the right.

Amid all the predicted Mourinho-related woe, it’s easy to forget that only Chris Smalling and Daley Blind started more league games last season for United than Mata. During Van Gaal’s two-year Premier League tenure, no United player created chances more often, only one contributed more assists and one scored more goals. No outfielder started more matches either, yet Mata avoided being tarred with the Van Gaal brush.

Now aged 28, Mata is only 15 months older than Ander Herrera and nine months older than new signing Mkhitaryan; this is a key player at his peak age. If there is one manager prepared to risk cutting off nose to spite face it is Mourinho, but even he would not cast aside a player purely to suit personal agenda. Would he?

Against Bournemouth, plenty of the United swagger was back. Bournemouth provided the assist with their own amateur defending, but Mourinho’s side took close to full advantage. Anyone looking at the league table before September merits a shoeing, but those singing in the away end will know exactly where their team ends the first weekend of the season. Even weirder was the sight of both full-backs walking off un-substituted after the final whistle. The times they are a changin’.

At the heart of United’s zip was Mata, buzzing around on the right wing to pressurise Charlie Daniels on the ball and drifting centrally to link up play when United had possession. Aside from scoring his goal, Mata completed 92% of his passes and generally looked as bright as at any point last season, released from the shackles of sideways passing ad infinitum. In sharp contrast to Wembley last weekend, his substitution after 74 minutes was met with standing ovation from his support; even Mourinho must have appreciated the effort.

Mata’s obvious issue comes when Mkhitaryan returns, but the withering form of Wayne Rooney could provide hope in that regard. Rooney started this season as he finished last, with all the grace of a giant panda.

Rooney’s new No. 10 position is so crucial to a side with a focal point up front and pace in wide areas, but Rooney’s party trick is to slow down play and pass the ball back. The England captain’s defenders (and there will be plenty below the line) will point to his goal, but that came from a mishit Anthony Martial shot that found him five yards from goal. We’re allowed to demand more.

We’re no longer at the stage where Rooney’s form is failing to take United forward; it’s actively holding them back. As some Manchester United-supporting wag amusingly commented on Twitter, ‘I’m liking this new ‘crisp packet’ position Mourinho has created for Rooney – floating around doing absolutely f**k all.’ Quite.

With Rooney ruled out of a position in central midfield by his new manager, and now surely behind Zlatan Ibrahimovic and Marcus Rashford in the striker queue, the question is how long Mourinho puts up with him in a No. 10 role. The suspicion is that his goal will buy him a few more weeks yet, but this is a manager who waxed lyrical about Oscar’s ability in that role at Chelsea. The contrast with Rooney could not be greater.

Mourinho will insist that a Premier League title race is a weak link game, where you are only as good as your weakest player. If Juan Mata is to be on the fringes of Manchester United’s first team, it’s emphatic proof of their strength in depth. Yet those who presumed Mourinho would rush to give away United’s third-most expensive player should reconsider. Expect the special Juan to contribute plenty to the cause.