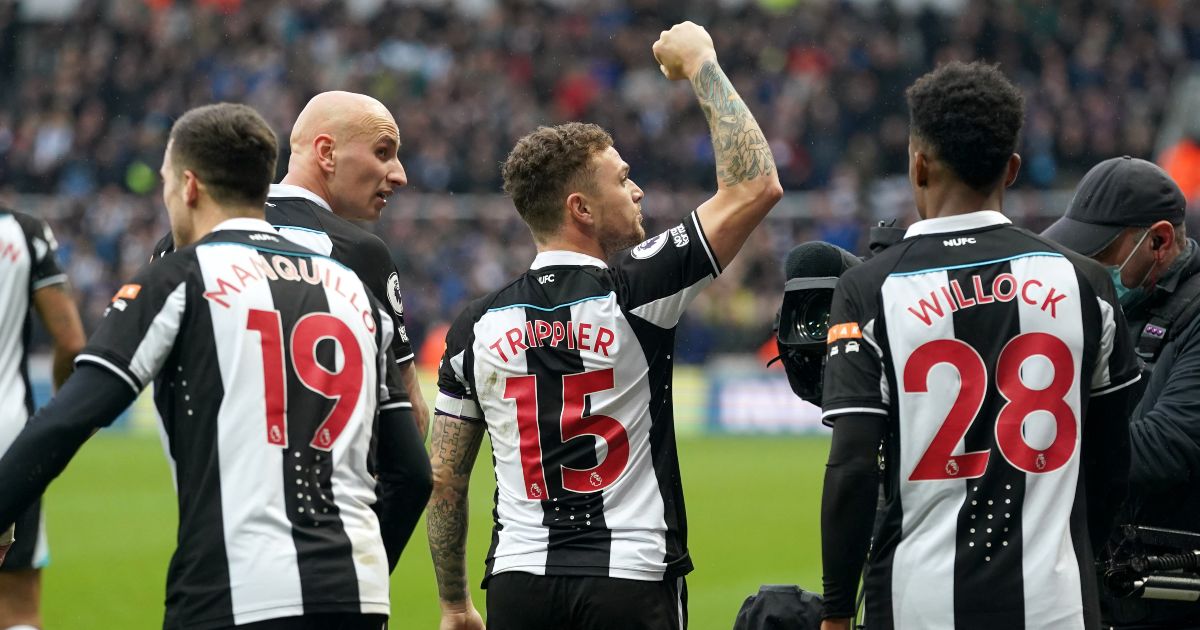 Kieran Trippier struck for the second time in six days to fire Newcastle to a third successive Premier League victory as they only just got the better of Aston Villa.

The England full-back’s 35th-minute free-kick secured a 1-0 victory which eased the Magpies four points clear of the relegation zone on an afternoon when VAR played a key role.

Trippier’s decisive effort came after referee Craig Pawson had been correctly advised to change his decision to award a penalty, and the official also had to rule out an Ollie Watkins equaliser for offside on the advice of his colleagues at Stockley Park.

Villa will feel they deserved to leave St James’ Park with something to show for their efforts after mounting a concerted second-half fightback, but ultimately they were unable to trouble goalkeeper Martin Dubravka enough to prevent his side from winning a third league game on the trot for the first time since November 2018.

Joe Willock sent a 20th-minute shot wide of Emiliano Martinez’s left post after Chris Wood had made a nuisance of himself on the edge of the Villa penalty area and with Ryan Fraser repeatedly finding space down the left – Wood glanced a 28th-minute header across the face of goal from the Scotland international’s delivery – Newcastle looked marginally the more threatening.

They were awarded a 31st-minute penalty by Pawson after Willock had been tripped by Calum Chambers, but a VAR check revealed contact had taken place inches outside the area.

However Trippier, who scored his first goal for the club from a free-kick against Everton on Tuesday night, repeated the feat with the help of a slight deflection off Emiliano Buendia’s thigh

Wood screwed a 43rd-minute shot well wide after Willock had robbed Douglas Luiz and the Newcastle striker deflected a John McGinn shot just past his own post in stoppage-time but the home side, with £13million January signing Dan Burn making an impressive debut, went in at the break a goal to the good.

They were dealt a blow, however, within three minutes of the restart when Trippier, who had shaken off a calf problem to start, went down and was unable to continue, with Emil Krafth taking his place.

Villa had returned in determined mood with Buendia in particular looking keen to make amends, and Watkins fired over from distance and Matty Cash across the face in quick succession with the Magpies unsettled.

Dubravka made his first save of note to claim Luiz’s 56th-minute free-kick, although was far from extended in doing so, while Martinez was relieved to see Allan Saint-Maximin’s goal-bound effort deflected wide by Cash’s lunge at the other end.

The visitors thought they had levelled when Watkins headed home at the far post after Philippe Coutinho’s shot had looped up off Fabian Schar with 61 minutes gone, but after a lengthy VAR check, his effort was ruled out for offside.

Steven Gerrard’s men piled on the pressure to leave Newcastle defending for dear life as time ran down, with Danny Ings and Leon Bailey having replaced Watkins and Buendia, but the hosts held firm to claim three vital points.