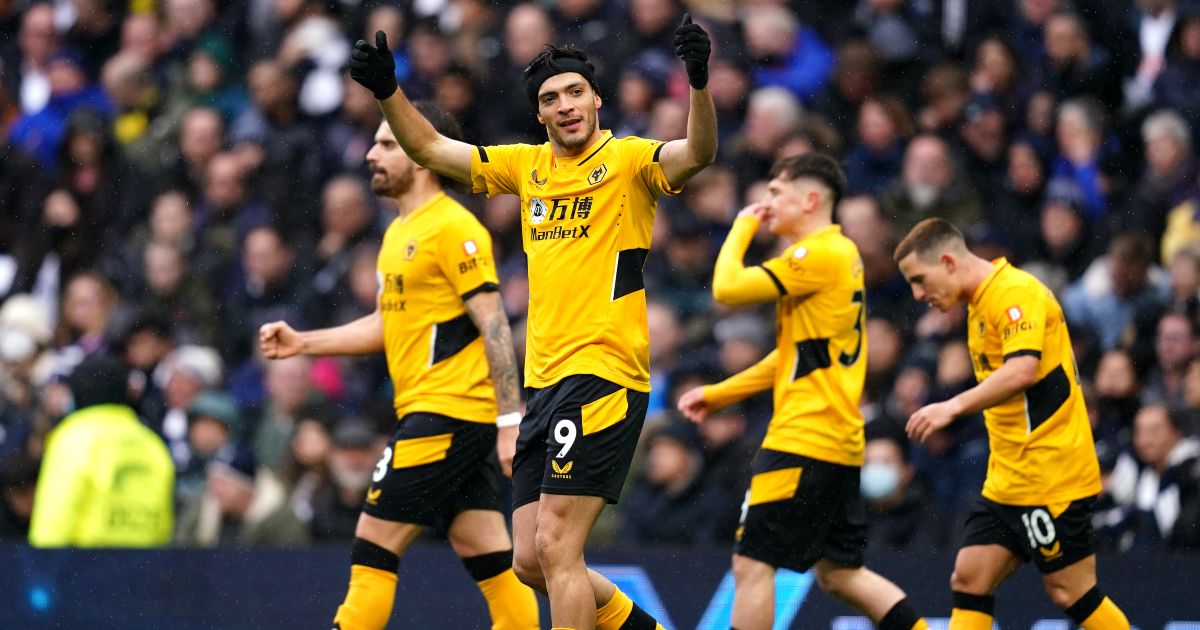 Wolves strengthened their top-four hopes with a 2-0 win at hapless Tottenham, whose own ambitions suffered a big blow.

Bruno Lage’s side scored twice in the opening 20 minutes, through Raul Jimenez and Leander Dendoncker, to lay the foundations of the triumph.

Not many will have fancied Wolves’ chances of competing for the Champions League places this season but they have gone under the radar nicely and with this result moved above Spurs and into seventh.

They thoroughly deserved their victory at the Tottenham Hotspur Stadium and, once they got in front, it was not until the final 20 minutes that Spurs looked like they were going to add to the measly eight away goals Wolves have conceded this term.

Harry Kane was on a one-man mission to try to score while Harry Winks’ had a deflected effort crash into the post, but this was another disappointing day for the hosts.

It was a third straight Premier League defeat for Antonio Conte’s team which highlights that, despite having games in hand on the teams above them, the top four is not a realistic aim.

They were totally culpable in their own downfall and could not have been any more generous in helping Wolves to a two-goal lead inside the opening 20 minutes, with goalkeeper Hugo Lloris having an afternoon to forget.

The captain could have been excused for parrying Ruben Neves’ shot from distance in wet conditions, but only he knows why he opted to punch clear Dendoncker’s follow-up effort, sending it straight to Jimenez, who finished with aplomb into the far corner.

Lloris was again involved as Dendoncker scored from close range in the 18th minute.

The Frenchman misplaced a pass to Ben Davies, the Wales international scuffed his clearance, allowing Wolves to break into the box. After Daniel Podence’s shot was blocked by Davinson Sanchez and rebounded off the post, Dendoncker rammed home from close range.

Tottenham were a shambles and Conte made an early change, sending on January signing Dejan Kulusevski for Ryan Sessegnon and switching to a 4-2-3-1.

It did not change anything as Wolves looked dangerous whenever they went forward and only smart stops from Lloris, denying Jimenez and Podence, kept his side in it.

Kane headed straight at Jose Sa with the final act of the first half and Spurs fans roundly booed their team after a diabolical display.

Spurs did not have to do much to improve after the break, but there never seemed any real prospect of them getting back into it.

England captain Kane again provided an easy save for Sa when played through on by Son Heung-min, shooting straight at him after his first touch had taken him wide.

Winks saw a deflected effort from the edge of the area smash into the post while Kulusevski saw a shot drift inches wide when he should have found the corner.

Kane and Cristian Romero also had headers saved in the final 10 minutes, but in the end Wolves saw it out to pile the pressure on West Ham, Manchester United and Arsenal.