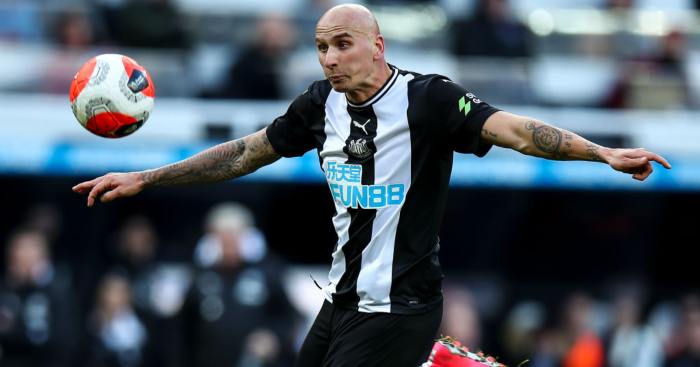 Shelvey has six England caps to his name, playing at all youth levels for his country and has one of the biggest clubs in England in Liverpool on his CV.

The midfielder moved from Charlton Athletic at the age of 18 to Anfield before struggling to become a regular at Liverpool, moving on to Swansea and now Newcastle.

However, Ritchie thinks Shelvey could be playing for the likes of Spanish giants Barcelona or Real Madrid if he concentrated “solely on football”.

Speaking to In The Box, Ritchie said: “For me, I’ve said to him so many times, ‘If you just got your head down, focused solely on football and forgot about golf and whatever else…’

“But what a player, what a player. I’ve been at Newcastle now for four years, and I’ve honestly seen him inside a box [rondo] no more than 10 times. That’s how good he is – and we do boxes every day.

“This guy has the natural ability to just see passes, to receive the ball, to move the ball.

“I remember playing against him as a kid. I think he was 14 – we were playing Charlton Under-16s at Portsmouth – and I think he scored a hat-trick. He was unbelievable.

“Obviously, he’s got his moves and he’s ended up at Newcastle. But I say to him very regular: ‘Jonj, if you had your head screwed on, you could play for Barcelona so easily.’

“He’s got everything, he’s got the short one, and at Newcastle now, he hits longer passes and tougher passes and he’s the one we look to to open teams up and create.

“But – and this is no disrespect to us at Newcastle – I feel like if he was playing for a Barcelona or Real Madrid, you could imagine he’d blow teams away with his ability.

“You’ve got to have everything in the right place, and he likes his golf too much, doesn’t he?