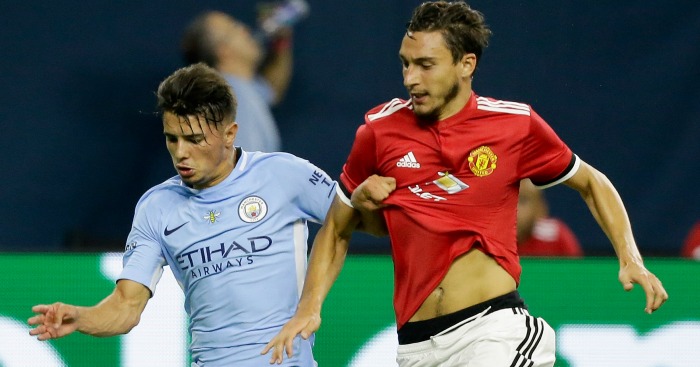 Matteo Darmian insists he is happy at Manchester United, despite reports linking the full-back with a summer return to Italy.

Two years ago the full-back took the plunge by leaving his homeland for the first time in his career, swapping Torino for Old Trafford in a deal worth £12.7million.

Darmian struggled to fulfil expectations in his first season and took his time to win over Jose Mourinho last term, eventually returning from the cold towards the end of the campaign.

The 27-year-old clearly impressed the United boss given he started the Europa League final triumph against Ajax – a match that at times this summer perhaps looked like being his last for the club.

Juventus have been strongly linked with a move for Darmian and barely a week goes by without talk of an Old Trafford exit, yet the full-back downplayed speculation as just part of the job.

“Every time I read something about my future… but (there is) nothing news (wise),” he told Press Association Sport. “I am happy here.

“I think also it is a part of our work, these kind of rumours.

“Like I said before, I am happy here so nothing news (wise). I am a Manchester United player – that’s it.”

Mourinho will have some decisions to make regarding his defence this summer, but retaining Darmian looks logical given his impressive end to last season and versatility.

“I always say the position doesn’t matter to me,” he said, having proven capable in both full-back slots.

“If I have to play left or right, I work hard to be ready when the manager gives me an opportunity and that’s it.

“I try to do my best every time, every game. I try to work hard during the week and that’s my philosophy.”

Pushed on whether he preferred one side to the other, Darmian said: “Not really. I prefer maybe to play on the right side, but no problem at all.”

Darmian is an understated character but his desire to keep progressing is clear, especially with next year’s World Cup looming large – assuming Italy make it.

“I did good personally,” Darmian said, referring to the 2014 edition when he shone against England. “Of course for me it is always good to play for Italy, for the national team.

“I try to do my best to be there next season.

“When you wear the Italy shirt you have big responsibility because you represent all the nation.

“I am very proud to be part of the group and I want to be part for a long time.”

Darmian broke into a smile when talking about the Azzurri, so too when reflecting on his summer having married Francesca Cormanni.

The full-back is thankful to her for helping him adapt to life in England, where he has had to deal with a change in style on the pitch as well as the many differences off it.

“I think Serie A is more tactical and less physical,” Darmian, whose English continues to improve, said. “Here, it is more physical, maybe more up and down.

“The rate is higher than Serie A and from the first day I tried to adapt this kind of football, but I think I have to say thank you to the team as it is also for them that I adapted well.”

If physicality rules in England, then United look to have signed the right man in Romelu Lukaku – a proven top-flight performer with an eye for goal.

“He scores goals and for us I think he is very important. Also he is our target.

“He is good for us even when we are under pressure maybe to put a long ball and he can hold the ball and try to beat the pressure of the opponent.”

Lukaku arrived for an initial £75million and is one of the many big-money moves that will surely make the Premier League more competitive than ever.

The playing field should be further levelled by the fact all traditional title challengers will be juggling continental exertions – something that cost United last term, stumbling home sixth in the league despite impressing in the cups.

“Of course when you play for Manchester United, you have to try to win a lot of trophies,” Darmian added.

“Also because Manchester United is used to winning we try to do our best to win other trophies.

“Last season was good because we won three trophies and we want to continue like this.

“We will fight for the Premier League, of course for the Champions League and the other trophies we have this season.

“Manchester United is probably the biggest club in the world. Of course it means a lot for me to be here and pushes me to every time do my best.”