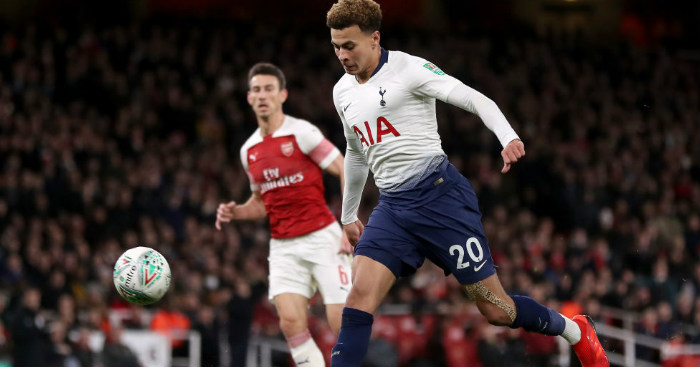 Arsenal did not make it terribly difficult for Spurs to score from the two counter-attacks that gave them a straightforward 2-0 win in an EFL Cup north London Derby, but that doesn’t mean Spurs didn’t also nail it.

Both of them came from phenomenal passes from around the halfway line: both absolutely inch-perfect despite the Spurs player making them – first Dele Alli, then Harry Kane – having only a fraction of a second to look up and assess their runners before playing the ball over the top.

Son Heung-Min curled in the first, and Alli went from creator to scorer for the second, timing his run to perfection before calmly and insouciantly dinking the ball over Petr Cech and into the far corner.

Perhaps it was the venue putting ideas into the ether, or perhaps it is just too delicious a comparison to leave alone given the two sides’ rivalry, but this performance brought to mind another of north London’s modern greats.

Dennis Bergkamp was a brilliant geometrist, a wonderful finisher, the perfect link-up man behind the main striker and, on occasion, an absolute shithouse bastard. He could both thread the needle and jab with it.

All of those qualities were on show in the derby, but it was the Tottenham man exhibiting them while the Gunners themselves toiled and struggled to find exactly that kind of cutting edge. The contrast with Henrikh Mkhitaryan – withdrawn at the break after another disappointingly wasteful 45 minutes – was stark. Even the needling was there, with the midfielder responding to being pelted with an object thrown from the crowd by turning around and holding up fingers representing “two-nil”. Ill-advised, yes, but understandable in the circumstances.

Christian Eriksen may be the creative genius of this Spurs side, but it is the mutual understanding between Alli and Kane that often allows them to turn the sublime into the devastating. Like Bergkamp and Thierry Henry playing ahead of Robert Pires, the pair have developed an incredible understanding of where the other will be and what run they will be making, and will plot their own movements accordingly.

It was not the first time in recent weeks that Alli has been instrumental in making it look so easy for Spurs. Just as he did here, he grabbed both a goal and an assist in the 3-1 thrashing of Chelsea at the end of November, four days later was the man who teed up Eriksen’s late winner in the crucial Champions League victory over Inter, and ten days ago was the key man in a tricky 2-0 win away to Leicester – a game in which he scored his 50th Tottenham goal.

It bears repeating just how young Alli still is. At 22 years old, he was the third-youngest member of the joint-second-youngest squad at the 2018 World Cup: only Marcus Rashford and Trent Alexander-Arnold were younger. He is three months younger than Ruben Loftus-Cheek. He has already won the PFA Young Player of the Year award twice, but is eligible to win it again not just this season, but next season too.

Being impressive and being truly excellent are different things, but after a relatively quiet year by his own standards, Alli is showing signs that he is ready to move from the first camp to the latter. And he’s a much better dancer than Bergkamp ever was.