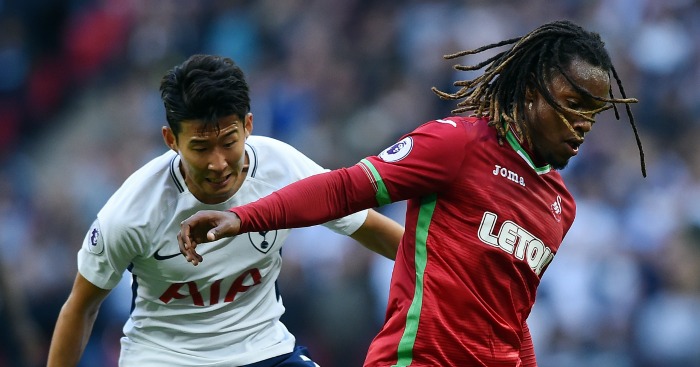 Sanches looks set to start in Swansea’s Carabao Cup third round clash against Reading at the Madejski Stadium on Tuesday.

And for the 20-year-old Portugal international it would provide another opportunity to work on match sharpness following his arrival in south Wales.

“He is a quality player, and in training he is so encouraging,” Swans defender Mawson said.

“The gaffer said last week he is going to take time to adapt, and he hasn’t played a lot of football lately, so he needs to get that fitness back and when he does he will be a star player and it will be a joy to play with him.

“He did well (against Tottenham). Obviously, it is a tough test to come away to Tottenham, and he had a good performance.”

Swans boss Paul Clement is likely to make changes for the trip to Reading, but not wholesale switches, with Sanches, Angel Rangel, Leroy Fer and Roque Mesa all probable starters, along with striker Wilfried Bony.

Swansea head back along the M4 three days after holding Spurs to a 0-0 draw at Wembley.

And Mawson, asked if the Swans required a reaction following their home defeat against Newcastle six days earlier, added: “Yes, especially the performance.

“We didn’t do enough last week, and we knew it would be a tough game, but we seem to come away to the big grounds, like we did season, and prove that we are a good side.”

Swansea are unbeaten in four games on the road this season in all competitions, conceding just one goal away from home, and Clement said: “Good defending has to be applauded.

“You go to Italy and they applaud it. We are showing that on our day we are difficult to beat.”

We have applauded you, Paul.