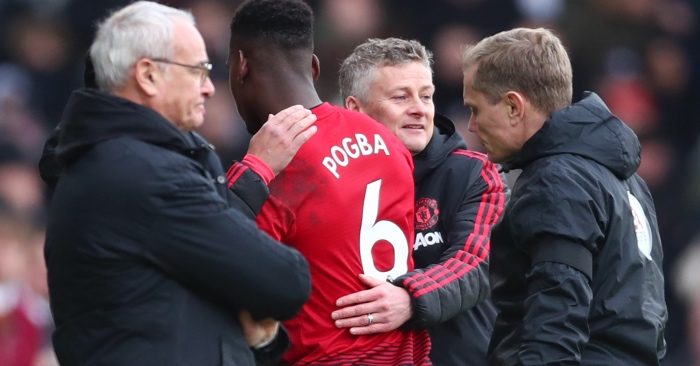 Pogba pre and post Ole
I don’t normally like clouding a good debate with stats but seeing as I do it for a living (which might be why I don’t do it for fun) I thought I’d look into the Pogba performance thing a little more closely.

From whoscored.com which seems pretty reliable, widely used and tracks the players in the top European leagues which must include most of the best players in the world, Pogba lies 15th this season with a rating of 7.56. He is scored slightly above the likes of Harry Kane (7.5), Luis Suarez (7.5) and Robert Lewandowski (7.48). And just above him are the likes of Aguero (7.65), Salah (7.67), Sterling (7.76), and Hazard (7.76). So he’s in pretty good company already.

While Neymar and Messi are streets ahead of the pack at around 8.5, Mbappe at 3rd on 7.96 to Ben Arfa at 30th on 7.43 shows the rest of the top players are bunched quite closely together.

Where it becomes really interesting is Pogba Pre and post Ole and Pogba by positions he has played.

Under Mourinho Pogba scored 7.04 which would put him at 214th in the list, level with Troy Deeney and Granit Xhaka. Under Ole Gunnar Solskjaer he scores 8.36 which puts him just behind that afore mentioned top 2. Admittedly, it is a smallish sample of games to compare him to the top 2 but to go from Troy Deeney to Neymar in the space of one season is some feat. If Pogba was able to keep up his levels under Ole for the rest of the season he would end the season on a score of 7.83 which would put him in 6th, displacing current 6th position Eden Hazard as the Premier leagues highest rated player.

Whoscored also have Pogbas score by position which sheds further light. As a defensive midfielder he scores 7.17, as a centre midfielder 7.31 and as an attacking midfielder 8.78 (only 4 games so doesn’t mean he’s the best player on the planet).

Maybe Ole is an avid fan of whoscored.com or maybe he just isn’t a dinosaur.
Jon (Cape Town, off to check the odds on Pogba getting the Ballon d’or within the next 3 years)

Bugbear
Rob, Gravesend, for the 147th time, away goals do NOT count double. If Liverpool draw 1-1 in Germany, the aggregate score will read 1-1. Liverpool will proceed to the next round on the basis of having scored more away goals, that’s all. Geez.
Matt Pitt

If one more person says “away goals count double” I think I may explode. Yes, they carry an advantage but they absolutely, categorically DO NOT COUNT DOUBLE!!
Dave, Berkshire (Spurs)

Joint press conferences
One report of the Liverpool-Bayern game quoted the managers as follows: “It’s not perfect, but it’s good enough,” Jurgen Klopp said… “Half full, half empty,” Niko Kovac added. This made it sound like they were sat next to each other, which made me think how much more entertaining it would be to force managers to do joint press conferences before and after games. They force the podium placers together after Formula One races, often with hilariously awkward consequences, football should do the same. We might have missed a golden age of Allardyce/Mourinho/Pardew/Pulis driven entertainment, but it would still be an improvement on the going-through-the-motions we get today. No doubt this is an old idea – but if Sky/BT are reading, you should make this a condition of the next rights agreement.
Shappo

Hendo’s performance
I’m glad to see Henderson getting the praise he deserved this morning including in the mailbox, your own article and a few newspapers. I very much like Henderson as our captain but I’m no fanboy, as at times I can understand why opposition fans are so perplexed by him, He can be very slow on the ball and unambitious with his passing. However it is nights like last night where he really justify’s himself. He played the way I think all Liverpool fans are often encouraging him or screaming at  him to do more often. I couldn;t find his exact statistics but I barely remember him giving the ball away, except for once when he won it back quite quickly. I know some people will say oh well its easy not to give it away if your passing sideways, but on top of him keeping the ball well, I counted 4 or 5 times when he picked up the ball well inside his own half and pinged it with pace straight into Mane/ Firmino’ feet 30 yards in front as Xabi used to do in his prime, and as all other top midfielders Xavi, Pirlo, Keane Scholes would often do. (Not comparing him to them so please dont start!). There was also 3 or 4 well placed 50 yard “hollywood” balls that brought Trent and Roberston into play with a quick change of wings and 2 balls over the top to Salah one of which nearly created a brilliant goal for him. Outside of his passing, it must have been 7 0r 8 times he either intercepted or was first to a loose ball to turn possesion over as is a CDM’s job. I can see why he frustrates but remember he started out as a right midfielder and he just put in that display against James, Tiago & Martinez. Hes not world Class, nor will he ever likely be near it. But if he can churn out more performances with that urgency and positivity over the next 2-3 years he could possibly improve himself to become a much  higher class of midfielders and gain a little more respect for what he does.
Pierce, Waterford.

Diamond Geezers
Having withdrawal symptoms from not having read an article of Diamond Geezers. Seeing the articles bring back memories! I always used to take over multiple clubs, sell fringe players from my beloved Arsenal for exorbitant fees and then splurge on world class players for the Arsenal. Great pieces to have on the site!

There was a mail few days ago about a story about a footballer, who passed up his chance and gave it to the more talented player even when through on goal. If i remember correctly that story related to none other than CR7. He has ensured his mate lives a good life just for that sacrifice of not being the kid to go to the academy. Don’t know how true it is to be honest, but I have heard the story.

Aguer-nooooo
Oh F365, you cut me so deep. I was perusing your fine website on my lunch break (obviously) and clicked on a page expecting some Mike Dean tomfoolery, yet I was confronted with something I could only describe as utterly horrifying. As bold and as clear as day, a video of what was scientifically-proven to be the worst goal in PL history. A goal I watched at the time and needed some extensive beer-based therapy to forget it happened, safe in the knowledge that QPR, led by a man who was one of our greats, had not actually lost a game they were leading in injury time.

So as nearly 7 years has passed, and I am most definitely “over it”, I thought I would watch the video to see Mad Mike celebrating Aguero’s goal as suggested in your article. Whilst the best bit of the video is actually the City fan who hilariously gives his scarf a public flogging when QPR are awarded a throw-in on 92:50, I have a couple of other observations of note.

Firstly, City’s second goal is scored on 91:14 and the game restarts on 91:50 (can you guess where this is going?), while their second goal is “scored” (more on that below) on 93:20 with the game restarting on 95:22. Add those to the 5 minutes of injury time already indicated and that makes 7 mins 38 seconds. Mad Mike blew the final whistle on 95:44. Is it too late to start a parliamentary petition to get that season annulled on the basis that QPR would definitely have scored again in the time that Mad Mike and his cohorts decided not to add on?

Secondly, let’s talk about Aguero’s goal. He did well to get through, but it wasn’t the most powerful of shots which went in at the near post and the keeper didn’t even put out his hands i.e. the keeper should have saved it. Said keeper was Paddy Kenny; it shouldn’t be lost on anyone that he signed for Leeds the year after, who of course hate (the real) United. Also, you can clearly see Kenny fist pumping the air after the goal goes in – he didn’t even try to save it and then celebrates. Presumably he and Mike Dean had a dance celebration planned before the game but lost their heads when it came to performing it. Another line for the petition.

Finally, is it not weird that the reverse fixture also ended 3-2 that season with City finding a late(ish) winner? Some might call that a dress rehearsal. *Mike (Dean) Drop*.

P.s. can you take down the article and repost in another 7 years when I might actually be over it?
Garey (I won’t be) Vance, MUFC