Home All The News Mbappe, Neymar give PSG injury worries for Liverpool clash 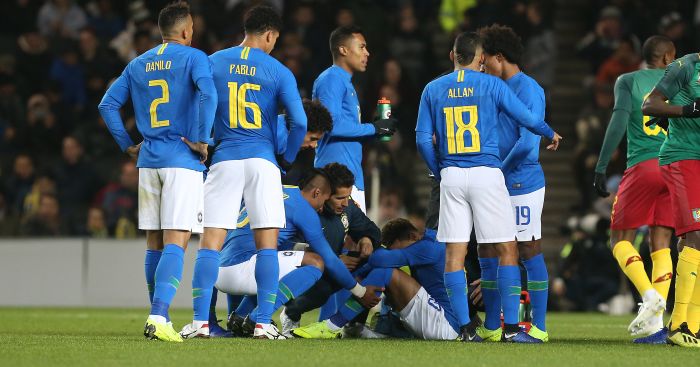 Paris Saint-Germain have injury doubts over two star men ahead of next Wednesday’s Parc des Princes clash with the Liverpool in the Champions League.

The injuries could not have been inflicted by two bigger stars with Kylian Mbappe and Neymar both forced off in their respective internationals on Tuesday.

Neymar’s problem seems the least problematic after he was replaced by Everton’s Richarlison just eight minutes into Brazil’s 1-0 friendly win over Cameroon in Milton Keynes.

Neymar picked up an adductor muscle problem while attempting to shoot, although Brazil team doctor Rodrigo Lasmar explained it was  “not a serious injury,” while Neymar also labelled it “nothing serious” on Instagram.

More from Planet Sport: EXCLUSIVE – Greg Rusedski gives his verdict on what comes next for Roger Federer (Tennis365)

Mbappe meanwhile landed awkwardly on his right shoulder and was replaced by Florian Thauvin just after the half-hour, after jumping over keeper Martin Campana in Les Bleus’ 1-0 win over Uruguay.

“He will have to see after with the medical staff. I hope it’s not bad.”

Liverpool face PSG next Wednesday night in their penultimate game in Group C of the Champions League, with victory enough to send them through to the last 16, however a defeat in the French capital will leave a final crunch game with Napoli in December.