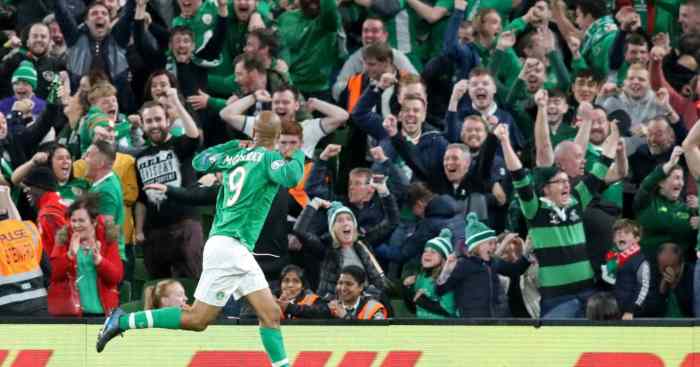 The 31-year-old Sheffield United striker marked his 11th senior appearance for his country with an 85th-minute equaliser to help Ireland maintain their lead at the top of Group D with a 1-1 draw at the Aviva Stadium on Thursday evening.

Coleman said: “I’m delighted for him, absolutely delighted for him. He works so hard for the team, as you could see tonight, and in training any time we meet up, he’s one of the best players every day.

“We know he’s got that quality and that goal there will do him the world a good. As I said, he’s a great lad, so we’re all delighted for him.”

McGoldrick’s intervention could hardly have been better-timed, cancelling out Fabian Schar’s well-taken 74th-minute opener with a bullet header to preserve an unbeaten start to manager Mick McCarthy’s second spell in charge.

There was a pat on the back from the 60-year-old manager for McGoldrick and coach Terry Connor after his work with the Blades frontman on the training pitch paid dividends.

McCarthy said: “It’s all the heading practice TC used to give him, he’s made him head it. I’m delighted for him. I’ve always trusted David McGoldrick.”

Ireland emerged from perhaps their toughest game to date in the group with something to show for their efforts against the side ranked 11th in the world having had to battle for their lives.

Switzerland will have a chance to gain revenge for the two points they let slip in Dublin when the sides meet in Geneva next month, and Ireland, who must first negotiate a tricky trip to Georgia three days earlier, know they may have to be even more resilient.

McCarthy said: “Well, we may have to circle the wagons over there a bit. If they play a lot better in Switzerland than they did here today, then we’ll have our work cut out.

“We’ve got point against a very good side. They dominated possession, they are a team with very good players playing with top-level clubs.

“But I think they were surprised by our attitude at the end. Never under-estimate us, they are a great bunch of lads.”