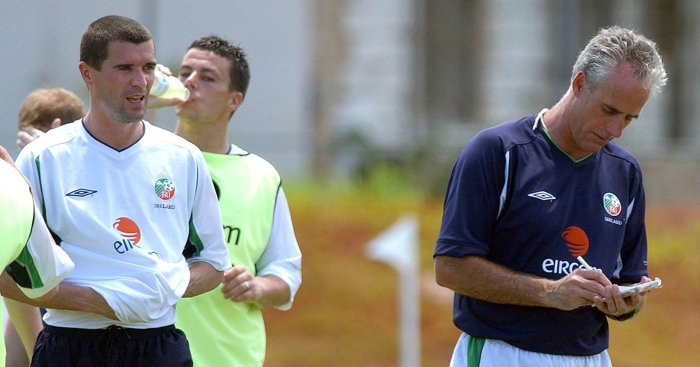 Mick McCarthy admits that he and Roy Keane almost came to blows long before their infamous 2002 World Cup row.

McCarthy and Keane clashed ahead of the 2002 tournament, with the latter having expressed his disgust at Ireland’s preparations for South Korea and Japan.

Keane has since discussed the incident, laying the blame squarely at the feet of the then-manager, but McCarthy has shed more light on their prior relationship.

“I had a run in with him on the bus coming back from the USA tour,” he told Paddy Power, discussing Ireland’s summer tour in 1992. “All the lads had been out, not just Roy. We were all waiting for them to come back, they’d only had a beer and were late getting on the bus.

“I’d had to go and fetch Stan’s [Steve Staunton’s] passport, I packed his bag and put it on. They all come on and I’m having a dig at them. I’m the captain, I’m the manager of Millwall at the time, so I’m saying ‘the bus is going, we need to go, we’ve a plane to catch’.

“Then, of course, yours truly gives me a mouthful, so I’ve gone to have a dig at him back. And we had to be split up. I was never intimidated by him. But that was it.”

McCarthy also defended Ireland’s bootcamp before the 2002 World Cup, which Keane was highly critical of.

“The pitches [in Saipan] weren’t great,” he said. “It was horrible. The surface was crap, the kit didn’t turn up.

“That was it. I took them to Saipan for a holiday. Seriously. We went there for four days, and I let them off on the p*ss for two nights. If I didn’t let them go on the p*ss there, they would’ve done it in Japan. So I let them have a blowout, before we go, then we’re down to the serious business.

“We were going to Isamu, and I’d been there and inspected that, they were five star facilities. So all we had to do for four days was go and have a little kickabout on the sh*tty pitch, and then we’d go to Japan to prepare.”

On the current Ireland assistant’s recent reported problems with players, McCarthy added: “Me and Roy have had our issues, of course, but I’m not in there with him, I don’t see what’s going on.

“All I will say is this: he’s the only assistant manager in the whole of the world who gets this much publicity, nobody else. It’s like Roy Keane’s Ireland. It’s bonkers, in my view. It shouldn’t be Martin O’Neill having to mop up anything else that’s going on.”