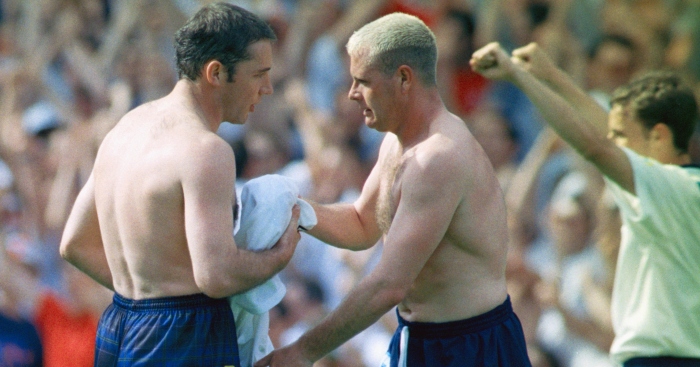 Former Rangers boss Ally McCoist claims the decision to withdraw Paul Gascoigne’s nomination for the Scottish Football Hall of Fame is an “embarrassment” to the game north of the border.

The former Gers and England midfielder was due to be inducted at a Glasgow dinner a week on Sunday.

But his invite was pulled on Thursday night, with organisers citing “a number of factors including ongoing enquiries and concerns over the state of Paul’s health” for the decision.

The U-turn came on the back of reports that several Scottish Football Association board members were set to snub the event in relation to concerns over Gascoigne’s suitability for the honour.

Now McCoist – who played alongside Gascoigne during his two-and-a-half year stay in Glasgow – has hit out at those behind the move.

“It’s just another embarrassment,” he told talkSPORT. “There’s no doubt that Gascoigne has been one of the players to brighten up Scottish football over the last 30 to 40 years.

“It was an absolute privilege and a pleasure to play with somebody of that talent. I actually think we got the best of Gascoigne when he was at Rangers.

“And does he deserve his place in the Scotland Hall of Fame? You’re joking, 100 per cent he does.

“But it’s just what happens in Scottish football. Not only do they make mistakes, but they just shoot themselves in the foot all the time.

“How can they release something saying Paul Gascoigne has been inducted into the Scotland Hall of Fame – great, Paul gets a boost – and then all of a sudden with nine days to go say it has been withdrawn?

The former Tottenham midfielder joined Rangers from Lazio in the summer of 1995 and won both Scottish player of the year awards in his first season, just weeks before scoring against Scotland at Euro 96.

He left for Middlesbrough in March 1998 but not before sparking a series of headlines with his behaviour both on the park and off it.

His first appearance at Ibrox during a pre-season friendly clash with Steaua Bucharest saw him make a controversial flute gesture – an act he repeated at Celtic Park in 1998.

Gascoigne also admitted assaulting his then wife Sheryl at Gleneagles Hotel in October 1996 – an incident that saw him widely condemned by women’s groups.

Since retiring from football, the 57-time England international has struggled with alcohol and mental health issues.

The former Wimbledon midfielder – who was famously pictured squeezing Gascoigne’s private parts during a 1988 FA Cup clash – called talkSPORT to say: “I’m absolutely outraged about this.

“Alcoholism is a disease, it’s uncontrollable, and Gazza has worked his backside off over the last couple of years to sort those problems out.

“He’s on the road to recovery and this is massive kick in the nuts. It’s absolutely disgraceful.”

Fans group Follow Rangers say they are “appalled” by the decision.

“Treating someone with known mental health issues with such insensitivity is unforgivable,” their statement added.

“Paul Gascoigne remains one of the greatest players ever to grace Scottish football. All Rangers supporters are right behind Paul and wish him well in his recovery.”