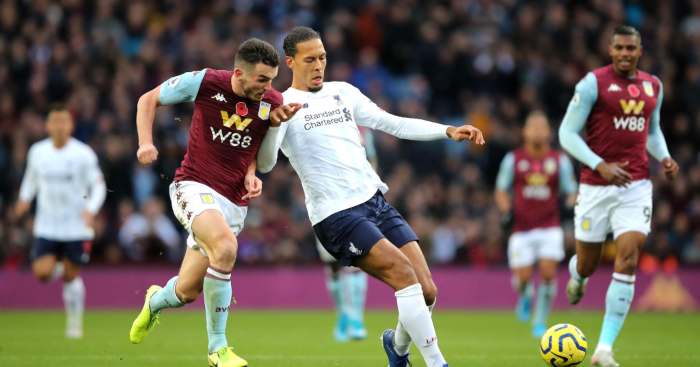 John McGinn admits he thought Aston Villa had “got” Liverpool after seeing their players “arguing with each other”.

Very late goals from Andy Robertson and Sadio Mane saw the Reds come from a goal down to beat Dean Smith’s side 2-1 at Villa Park on Saturday.

Trezeguet opened the scoring for Villa, giving McGinn belief they would win, but Liverpool roared back to maintain their six-point lead at the top of the Premier League.

“A lot of their players were arguing and you could tell they were uncomfortable in the first half,” McGinn told reporters.

“When teams start arguing with each other you normally know you’ve got them but at the same time you have to respect they are such a good team, they just regroup, get together and go again.

“Unfortunately for us they did that.”

“They don’t give up, they keep going and they probably tired us out too much right at the end.

“Chances were coming and we were just trying to keep them at bay but the ball just keeps coming back at you.

“It was two sloppy goals from our point of view but teams like Liverpool do that to you.

“They are relentless. It was the same with Man City last week, they just drain you mentally. You try your best to press them but they are top teams and full credit to them.

“I was speaking to a couple of the Liverpool lads and they said how impressed they were at the way we played them – carry that on and I’m sure we’ll be fine.”