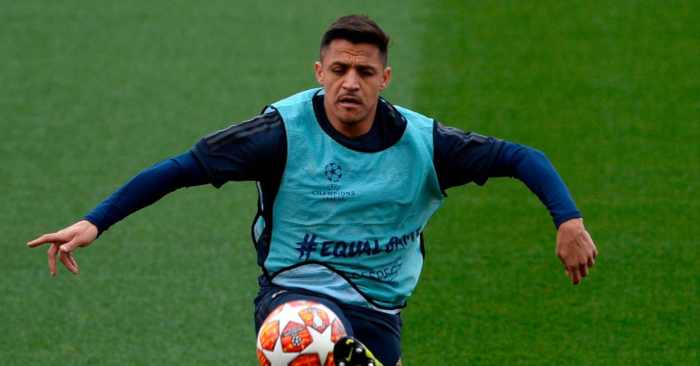 Exhibit one: ‘Alexis Sanchez’s staggering earnings from sitting on the bench revealed.’

And who has ‘revealed’ these ‘staggering earnings’? That would be bwin, who ‘revealed’ this on April 1. Fully two weeks later, the Mirror are flagging up those (out of date) figures now. Why? Because people are Googling Alexis Sanchez, that’s why.

We are told in the second paragraph – of a story that is apparently the biggest news in football on Tuesday morning before a Champions League quarter-final – that Sanchez would ‘bombard her with phonecalls and even invited her to visit him in England’.

Even? If you were ‘bombarding’ somebody with phone calls, it would be weird if you didn’t invite somebody to visit you, surely? Oh and at no point do the Mirror explain that this Paraguayan model actually lived in Spain (we read the original interview, published two days ago) and thus inviting her to visit him was pretty bloody normal; it takes about two hours.

Still. What a dick, eh. He accepts money that a club voluntarily pays him…AND he invites women to visit him. He is evil incarnate.

‘Ms Sosa says Sanchez ‘destroyed’ her, later discovering he was allegedly speaking to other women at the same time.’

So a man she had never met was also ‘speaking’ to other women? On the phone? Does the humiliation never end? And as she never met him, that man may or may not have actually been Alexis Sanchez.

For the record, his agent claims his client has literally never had any contact with this particular woman.

Champions League? What Champions League?
Still, at least the Daily Mirror acknowledge that a Manchester United player is the headline-maker on this grimy Tuesday morning. Over at the Sky Sports website, it’s all la-la-la and nothing to see here.

Their top headline at 11.30am ahead of the Champions League quarter-finals (to which they have no rights)?

‘Emery: Top four in our hands.’

Yep. It is. Thanks for that.

Perceptions
On Monday, Kevin de Bruyne’s piece in The Players Tribune featured his thoughts on his Raheem Sterling and how the perception of his new teammate had been that he was “arrogant”, presumably because that was how he had been portrayed in the media.

So how do the Daily Mirror report this on Tuesday?

‘Kevin de Bruyne has admitted he thought Manchester City team-mate Raheem Sterling was a “bit of a d*******” when he first met him.’

Is it because he was smashed in the head?

Yes it’s because he was smashed in the head.

Fergive me father…
Jonathan Walters appeared on 5Live’s Football Podcast and revealed that – sit down, finish your coffee, put away any fine crockery – Phil Bardsley told him that Alex Ferguson believes that Liverpool might win the league.

UNFERGIVEABLE shouts The Sun, before yawning out a 200-word report on a third-hand anecdote which may or may not have been spawned by polite conversation between two people who briefly worked together.

Absolutely right though: take away Ferguson’s knighthood, then beat him to death with his own key to the City Of Manchester.

Table salt
Familiar themes for Martin Samuel in the Daily Mail this week, as he takes a swipe at – gasp – Paul Pogba. He’s not Cristiano Ronaldo, you see, and doesn’t deserve to be earning in the same bracket. Careful Martin, that’s probably not a thread you want to pull at too hard.

His column also includes a bizarre little dig at Tottenham:

‘Going into Monday night’s fixture, the league table stated that Tottenham are as far off the top two as Leicester are away from the top six: 16 points.

‘Whatever mitigations for two transfer windows passing without investment, it cannot be said to have worked.’

Put down the Enigma Coding Machine for a second, Martin, and have another go at deciphering that table. It might tell you that Tottenham are out-performing three fairly well-heeled sides and have been doing so for some time. It might also tell you that Spurs are actually closer to Manchester City than they were last season.

Maybe pause for thought when you take your seat at the Etihad tomorrow night for a Champions League quarter-final which Spurs currently lead 1-0.

Punditry of the week
“This is going to sound stupid…”

It’s a strong start from Dean Saunders on talkSPORT.

“…but Aubameyang’s goal is goal of the season. For me, I enjoyed that goal more than Mo Salah’s vs. Chelsea.”

It did, Dean. It really did.

Platform change
SunSport online on Shkodran Mustafi: Forced to play at right-back and his lack of pace and positioning was exposed at times. Looked uncomfortable with the ball at his feet when he needed to drive forward.’