Home Mediawatch Mediawatch: Allardyce and the pint of wine 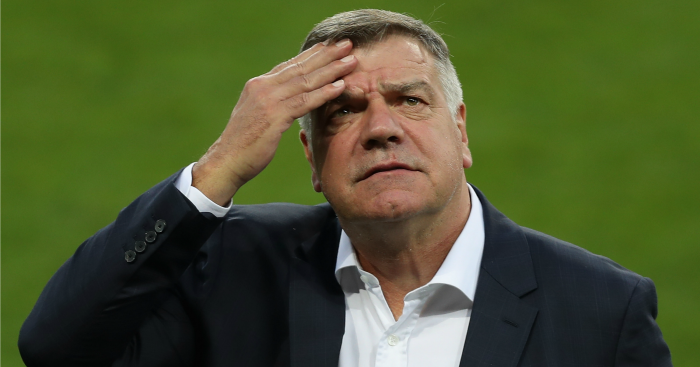 Cham-pagne in the arse
Whatever your thoughts are on the severity of the Sam Allardyce sting, and opinion is divided, Mediawatch would urge you to take a moment to celebrate the glory of the following image: Allardyce met a group of potential business partners, and considered it appropriate to drink a pint of wine.

Get that man a statue.

What a man. Let him hold his head up high.

Read all about it…
Sam Allardyce’s alleged naughtiness and confirmed stupidity means that football news on Tuesday has become a one-story issue. When in doubt, man the live blogs.

Mediawatch can’t help thinking that The Sun were suffering for a lack of actual updates, though. Between 9.10am and 10.45am, the sum total of their live blog on the story was a link to a piece they have written on third-party ownership, an image taken from that piece on third-party ownership and a reminder that Allardyce left his house at 7am without saying anything.

‘Allardyce’s neighbours, meanwhile, are “twitching their curtains”,’ is the only other information provided. What, constantly?

Sometimes, you just have to wait and see.

Read all about it…
Still, even The Sun get outdone in the ‘erm, we haven’t got much to say here’ live blog entry of the day. The Daily Mirror have steamed ahead:

‘What a diff’rence a day made. Twenty-four little hours. Brought the sun and the flowers. Where there used to be rain.

‘So it’s kind of the wrong way round, but the Dinah Washington classic is rather pertinent in Big Sam’s case. Yesterday his biggest issue was a game of golf – well, at least until he had to leave the post-round meal early anyway.’

So it’s pertinent, apart from that it’s the complete opposite? And this was all to tell us that Allardyce played golf yesterday? Thanks for that.

Read all about it…
Yet even the Mirror don’t win our favourite Allardyce-related live blog entry. That goes to the Daily Telegraph.

The Telegraph rightfully deserve respect for getting the story, but Mediawatch did enjoy them using their own live blog to do it:

‘Praise for Telegraph’s ‘first-class investigative reporting’,’ reads their 10.19am update from a blog supposedly offering information on Allardyce’s future.

What then follows is five tweets (with one repeated) from random Twitter users saying congratulating them. Excellent work.

Entry headline at 10.09am: ‘ALLARDYCE COULD FACE FA PROBE’

Entry headline at 10.56am: ‘ALLARDYCE HAS SHOWN POOR JUDGEMENT’

Make your mind up

‘ALAN PARDEW is the bookies favourite to become the new England manager – with Sam Allardyce fearing the sack by the FA’ – The Sun.

And the URL of that page? ‘thesun.co.uk/sport/football/1860510/england-manager-odds-eddie-howe-the-favourite-if-the-fa-sack-sam-allardyce/’

The worst of all the takes

That, ladies and gents, is why we'll never win football World Cup. Those #Samsting journos should be ashamed of themselves! #helpdonthinder

Conversation of the day
From Jamie Vardy’s upcoming autobiography:

‘I had a three-litre vodka bottle at home I would put loads of Skittles sweets in. After that, you can drink the vodka neat and it tastes just like Skittles. When I was bored at home in the evening I’d pour myself a glass, sit back and enjoy. The vodka was decent but it wasn’t doing much for my dead leg, which didn’t stop bleeding for ages.

‘Dave Rennie, the physio, said he couldn’t believe it wasn’t improving. He’d seen a torn calf muscle heal quicker. He pulled me aside one day when nobody else was about.

‘“What are you doing?” Dave asked.

‘“Nothing I wouldn’t normally do,” I replied. Then I explained that what I’d normally do was drink Skittle vodka.

Mediawatch didn’t think we’d enjoy Vardy’s autobiography. We may have been so, so wrong.

‘Chelsea are weighing up a move for Tottenham defender Ben Davies in January, sources close to the Stamford Bridge club have told ESPN FC,’ a story by Pete O’Rourke begins.

They also told The Sun’s Mike McGrath, who had an exclusive on this story eight days ago.

‘He [Wing Shing Chu] could write his own book, and would no-doubt be a reporter’s dream contact, but he knows that what goes on in Wing’s stays in Wing’s and that confidentiality is part of the attraction for a certain type of customer’ – Mike Keegan, MailOnline, September 5.

Unless you’ve got an England manager meeting a Chinese consortium, apparently.

Ten thousand spoons
Top irony marks to MailOnline, for running a story about Antonio Valencia’s request that the media not interfere in his private and family life. It’s like tabloid-ception.

The story includes naked photos from Instagram, social media photos of Valencia with his estranged wife and daughter and three other photos of a lady he is ‘said to have exchanged raunchy messages’ with.

This probably isn’t what Valencia meant when he said ‘not to interfere’.

Burn…
‘Manchester United stars Paul Pogba and Marcus Rashford trolled by Jesse Lingard on Instagram’ reads the Mirror Football headline. This is the big one.

So, what did Lingard say about teammate Rashford? That he drives a s**t car? That he isn’t old enough to drink alcohol in America? That expected goals actually mean he’s going to be crap?

“My name’s Rashford and I like to score on my debut. I scored for Manchester United, England and the Under-21s.”

‘Aston Villa manager Roberto Di Matteo will be sacked unless he does this – reports’ – Daily Express.

Surprisingly enough, the ‘this’ is winning some bloody football matches.

‘Spotted: Jose Mourinho heads to Man United training (but what is he wearing?)’ – Daily Express.

Oddest headline of the day

‘The best team goals of the season so far, as visualised by a robot’ – Daily Telegraph. Us neither.

Recommended reading of the day
David Squires on Arsene Wenger.